After fifty years of accommodating the weather and the audience of upstate New York, the facade of the Saratoga Performing Arts Center (SPAC) is going to get a face-lift.

The new look of SPAC, drawn at right, will be a contemporary update to its current recognizable features. Old materials will be have new and formidable replacements, including the weather-resistant “Parklax”. 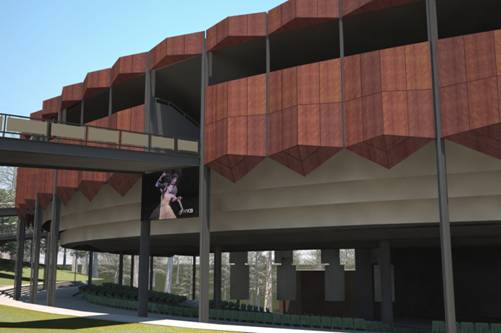 These changes will appease concerns over the aesthetics and safety of the rough old facade.

In addition to making the outside appearance different, the changes will create a new sound in the amphitheater.

Hanging speakers at SPAC will be replaced with more current models, and re-positioned to a higher point. This will provide better audio coverage and increase the quality of sound heard from the lawn.

The project’s funding comes from a gift from Susan and Bill Dake, who felt motivated by the impact of SPAC on the region’s culture and economy.

The renovations are set to be completed in time for the 2012 season, so going to see the New York City Ballet, Philadelphia Orchestra and the Jazz Fest will have an entirely new look in 2012.

Excited for the new changes? Do you think it will change SPAC for the better? Tell us what you think!