The 12th Annual Great Pumpkin Challenge took place on Saturday, October 20, at Saratoga Spa State Park and was one for the record books. The results are in, and the day was a complete success from the 5K to the 10K race to the pumpkin contest. 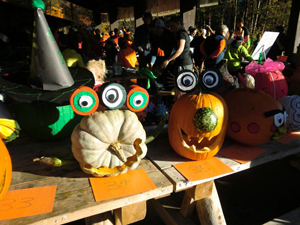 Over 2,000 runners, walkers, spectators and volunteers showed up at the Columbia Pavilion in the Saratoga Spa State Park to help raise money for Saratoga Bridges. The Great Pumpkin Challenge is a fun-filled day of fall fundraising involving 5k and 10k runs as well as a pumpkin decorating contest. Creativity abounds at this festive event, and this year, a record setting $26,000 was raised to help support the programs and services run by Saratoga Bridges. 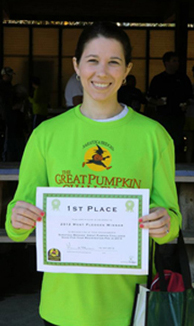 Saratoga Bridges is a non-profit organization that helps people with developmental disabilities achieve their goals, hopes and dreams as they work, shop, play, and volunteer throughout their communities while leading full, productive and contributing lives. Learn more about Saratoga Bridges >>

Michele Wyse (pictured) raised $415 for Saratoga Bridges and was recognized as pledge winner, awarded with a certificate as well as an Apple iPod Touch!

The Great Pumpkin Challenge 2012 was a success with an incredible amount of money raised for a good cause and lots of fun for everyone in attendance.

Did you participate in the Great Pumpkin Challenge this year? Tell us which pumpkin made the biggest impact on you!