Dig out that Santa Suit from the closet, and join the local community in getting together for the public good as well as personal pleasure at the Inaugural Saratoga Santacon on December 22nd!

Never heard of ‘Santacon’ before? On the event’s Facebook page, it is defined as “a non-denominational, non-commercial, non-political and non-sensical Santa Claus convention that occurs once a year for absolutely no reason.”

So what do you do at a Santacon? That’s easy…

You dress up as Santa and enjoy great food and drink at downtown bars! Not only that, but you do it alongside other fellow Santas while giving back.

In this case, all Santas are asked to bring at least two non-perishable food items to benefit the local food bank at Franklin Community Center. For those who don’t remember from Math class, “at least” means “greater than or equal to” (meaning, you can bring more than just two if you really want to be a “Saint” Nick).

Okay, so, it’s a bar crawl for Santas, right? Don’t call it that! Their Facebook event page clearly states: “Santacon is not a bar crawl. Every time you call it that, a sugarplum fairy dies.” That’s something no one wants, so please be careful! 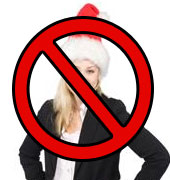 Think you’ll just throw on a Santa hat and head downtown for some fun? Think again. The idea is to dress “head to toe” in full holiday attire, whether that’s a full-on Santa suit, elf suit or something else, you decide… but it’s go big or go home. Their Facebook event even says those wearing just a Santa hat will be “jeered off the sleigh” (not a fate I would wish on my worst enemy).

Wondering about the specifics for this year’s First Ever Saratoga Santacon? At publish time for this article, not all bars have been released, but we do have more details for you and will keep updating our page for Santacon Saratoga Springs as info becomes available. Learn more >>