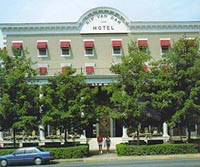 According to Saratoga Springs city officials, an area real estate developer is planning to construct a new hotel on the same property where the historic Rip Van Dam hotel is located.

The new hotel proposed for the 353 Broadway location would be six floors with 130 rooms, and attached to the rear of the Rip Van Dam and Starbucks building, according to city planners.
The property is owned by real estate developer Bruce Levinsky’s Merlin Development group and his plan is to construct a new hotel on the land behind the Rip Van Dam. The .68-acre property behind the Rip is currently used for parking spaces.

The restaurant located on the first floor of the Van Dam, Maestro’s, will stay open while construction is being done on the property.

According to city planners, the proposed hotel would be attached to the rear of the Rip Van Dam and the building with Starbucks on the first floor. There are plans to build a top-floor banquet space and valet parking for the new hotel too.

Are you excited about seeing a new hotel go behind the Rip Van Dam?