The Saratoga 150 celebration included an equine window decorating contest which recently concluded. The entries went above and beyond what was expected, creating such fabulous and impressive window displays that the judge had trouble picking a winner!

Spa City is celebrating no small feat, having reached 150 years of horseracing in Saratoga! The window decorating contest showed how excited area residents and businesses are about the longstanding tradition of thoroughbred horse racing at the Saratoga Race Track.

Saratoga brought in a judge from outside to pronounce a winner. She came from Northampton, MA, a town of similar size to Saratoga. She was so impressed with the originality and creativity of the displays that she went back the next morning to confirm her findings.

The decision was a hard one — so much so that six runners up were named! Ultimately, the third went to G. Wilikers, … 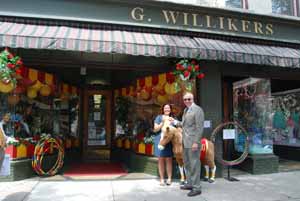 … the silver went to Impressions. 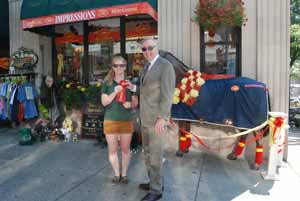 First place, the gold medal winner above all the many decorations, was … Lifestyles! 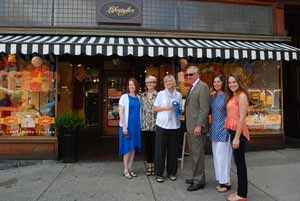 Many stores were given honorable mentions to do justice to their own very respectable displays. So as to be fair, they’re listed in alphabetical order: Aggie Mullaney, Compliments to the Chef, Crafters Gallery, Hat Sational, Paper Dolls, and Silverwood.

Not just Broadway businesses got into the spirit: on Phila Street, Creative Sparks and Miss Scarlett’s Women’s Boutique and on Henry Street the Little Red Millinery all had their own exciting displays. Skidmore Apartments put a wreath over their horse sculpture to participate in the community action.

The success of the Window Decorating Contest is surprising even for a Saratoga local. The judge was simply blown away. Her town is similar, but with a less vibrant main street community, and she hopes to take back some of the great ideas we put into practice here. Saratoga’s fun and unique community yet again sets an example with its innovative ideas.

Be sure to bask in the lovely decorations while the season lasts. What were your favorites?