The Saratoga 150 Viewing Stand Replica, built recently by Legacy Timber Frames and designed by Saratoga architect Phinney Design Group, restores and reinvigorates the Victorian aspect and history of the Oklahoma Track. It’ll enthrall and excite anyone who appreciates the history or the horses!

Recently opened, Saratoga’s new Historic Viewing Stand is a perfect replica. Saratoga 150’s living up to its heritage with this stunning and brilliant new development. Racing fans get a better picture of the races in a picture of the Victorian style. 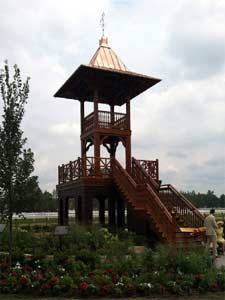 The Viewing Stand Replica was a team effort between local companies, including Phinney Design Group and Legacy Timber Frames.

By auction, Legacy received the woodworking job and set to work making the hand-crafted timbers with traditional joinery and pegs in the fashion of the original viewing stand 150 years ago.

Attendees will be surprised at the authenticity and Victorian atmosphere of the design thanks to these companies’ cooperative efforts.

The original plans for the Viewing Stand Replica were to build at East Ave at the Oklahoma Track. The location aroused controversy in the jockey community due to concern that its proximity and magnitude would excite the horses.

An agreement decided that the designs would be relocated to Potato Chip Lane to remain on the periphery of the track without being disruptively close.

The Viewing Stand Replica opened recently on August 1st to a ribbon cutting ceremony. It’ll be available to the public soon for the Saratoga 150 racing season. Make sure to beat the bustle for a perfect view of the whole track from this new stand.

The Stand itself is 37 feet tall, with a platform 10 feet off the ground. The platform supports the timber structure, which holds up the roof. The construction is the same as the original Victorian structure, with traditional joinery and sporting a decorative weathervane on top.

Saratoga’s quaint character inspired Red Smith to declare, “From New York City you drive north for about 175 miles, turn left on Union Avenue and go back 100 years.” Saratoga 150 has taken up and continued this legacy and added much to the track.

The Historic Viewing Stand has added to the Victorian atmosphere and romantically nostalgic aspect that lingers behind the racetrack. Horse fans and history buffs alike will appreciate the Viewing Stand Replica so close to the action and our hearts.