Saratoga Reads has announced its book of choice for the 2013 – 2014 year. Let the reading events begin!

As the shared literary experience of Saratoga Reads heads into the colder months, we can look forward to community events such as group discussions, enactments, literacy and library experiences, school and arts events and other treats to celebrate the year’s chosen book.

For 2013 – 2014, Saratoga Reads has just announced they will be celebrating And The Mountains Echoed, by Khaled Hosseini. 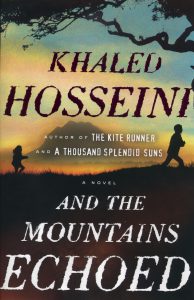 Hosseini has been revered before by Saratoga Reads when they choose The Kite Runner back in 2004.

“In celebration of our 10th year, we come full circle with the selection of the author’s third novel, And the Mountains Echoed,” said Tabitha Orthwein, chair of the Saratoga Reads board. “We return to a familiar voice and will traverse the world once again through Hosseini’s powerful storytelling.”

Hosseini’s third novel follows characters from Afghanistan to Greek Islands to Paris and even San Francisco with interlocking story plots and new environments.

For younger readers at all levels, Saratoga Reads has created a list of companion books for And The Mountains Echoed to get them started with other stories that shed light on different backgrounds and Afghan cultures, including The Sandwich Shop, Extra Credit and The Breadwinner.

Saratoga Reads is a Skidmore College-Saratoga collaboration that hopes to use reading to strength the bonds of the Saratoga-area community.