Visit Saratoga.com For Everything Saratoga
Enter Giveaways Advertise
Home  »  Events  »  Gearing Up For The Winter Olympics In Saratoga

This past weekend, Saratoga played host to Winter Olympics hopefuls as some of the top speedskaters in the country competed in the American Cup Short Track Speedskating Championship at the Saratoga Winter Club on Weibel Ave. 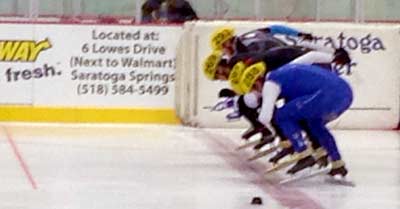 The event was held in preparation for the US Speedskating Olympic Trials, which will be held in Salt Lake City, Utah around the holidays. The best of the best will then move on to Team USA to compete for those prized medals in the 2014 Olympic Winter Games!

This year, however, the Olympic speedskater who holds the unofficial title of “most medaled U.S. athlete at the Winter Games” has announced he will not be competing.

According to TeamUSA.org, “For the first time since 1998, the U.S. Speedskating Team will arrive at an Olympic Winter Games without Apolo Anton Ohno. An eight-time Olympic medalist… Ohno plans to work for NBC at the Sochi Games. Ohno won two gold, two silver and four bronze medals in three Winter Games, including one silver and two bronze in Vancouver.”

Ohno will be missed, but this provides an opportunity for another speedskater to fill his skates! This past weekend, the Saratoga Winter Club was alive with anticipation and determination. These athletes are in it to win it. Seeing them race across the ice got our heart rates up just watching! Witnessing those speedy muscle machines racing side by side was akin to being at Saratoga Race Track… only colder! It certainly got us excited for the Winter Games.

Were you at the Weibel Ave ice rink watching the races this past weekend? Does this news get you excited for the Winter Olympics? Tell us your favorite Olympic Games to watch!