Stewart’s Shops and NYRA partnered to offer a great deal – season passes to the Saratoga Race Course! Passes will be sold at 150+ Capital Region Stewart’s stores at incredible prices! 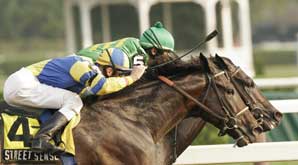 The pass prices are listed as follows:

Normal general admission is priced at $5 per visit, so even if you go to the track just six times during the season, the pass pays for itself! Passes last from July 18th through September 1st – more than six weeks with unlimited access to the track!

This is a great deal and not something to be missed!