New businesses are popping up all over the Saratoga region just in time for Spring! From Smashburger to a paint studio where you can sip your favorite beverage… we have you covered on our favorite new spots that have just arrived and those on their way to the area! 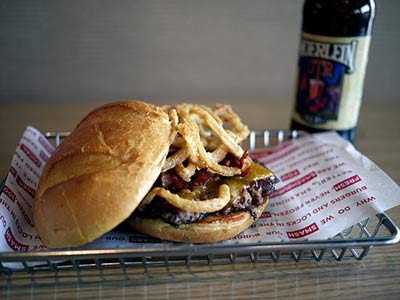 Great food and Saratoga Lake? Count me in! If this combination speaks to you too, check out Carson’s Woodside Tavern. Projected to open their doors this March, they will serve lunch and dinner 7 days a week. Carson’s will also promote live music nights, so keep an eye out! Their menu is still being honed to perfection, however it will feature a diverse spectrum of food ranging from hefty sandwiches to cooked-to-perfection steaks.

If you’re looking for a freshly made bite to eat, look no further than Gennaro’s Pizza Parlor located in the Hamlet at Saratoga Springs shopping plaza on Route 50. Since opening in January, Gennaro’s has received rave reviews for its old-world style pizza that uses a winning combination of fresh ingredients and Italian imports (a rare gem in the area!) Not in the mood for pizza? The famed Smashburger franchise has finally made its way to Saratoga… Located right next door to Gennaro’s! Stop in for a burger that’s smashed, seared and seasoned to order.
Just South of Saratoga, Ellsworth Commons in Malta is booming with new businesses! Bua Thai Sushi is opening up in March, along with Creative Corks, a paint studio where you can explore your inner Picaso while relaxing with your favorite beverage, in April. Broke a nail? No worries! House of Polish Nails & Spa recently opened up here as well! DNS Electronics, an existing tenant who supplies GlobalFoundries, is expanding its space in the commons.
Victory Cola, a Maryland start-up company also has plans to locate a bottling plant in Victory Mills. The company is working on developing the first USDA-certified 100 percent organic cola. Victory Cola will be made from real fruits, spices, organic cane sugar and of course, the legendary waters of Saratoga Springs. Sounds like sweet news to me!