The hype surrounding the long-awaited Winds of Winter continues. But could there be an end date in sight? 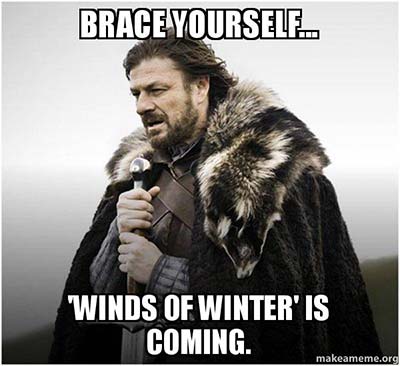 George RR Martin recently wrote on his blog that he has cancelled his scheduled appearance at the World Fantasy Convention in Saratoga held from November 5-8.

This cancellation is due to Martin finally getting the “monkey” off his back that is finishing Winds of Winter, the novel he has been writing since 2010.

Martin wrote that he was hoping to return to Saratoga for the convention, as last time he was here he had a wonderful experience. He described it as, “A terrific town, a wonderful con.”

He also encouraged those who were planning on going to see him, to attend regardless, as he assures a great time is ahead of them. Registration is currently closed for the event, however, there is a waitlist.

While this is somewhat disappointing news for fans in the area, there is a silver lining…

If Martin completes Winds of Winter before the World Fantasy Convention, he stated that he reserves the right to change his mind and attend.

Stay hopeful, Saratoga Thrones fans… We may just get a visit from Martin and the long awaited sixth book!