No, this is not an April Fool’s joke… Come celebrate Spring and the start of patio season! 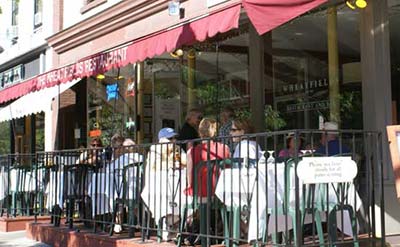 Who doesn’t love grabbing a bite to eat on the patios of Broadway during the warmer months? I know I do!

Spring is (almost) in the air, and it’s time to move from the table farthest away from the drafty door to one right out in the sunshine.

From people-watching to relaxing in the sun with a drink in hand, it is definitely one of the highlights of downtown Saratoga for many.

While there may still be snow on the ground, try to think Spring! Many downtown restaurants will be setting up their patios on the first day allowed by law, April 1st.

In fact, Wheatfields will be kicking off the season with their annual patio party, held sunshine or snowflakes.

Not sure which restaurants have great outdoor dining? Take a look at some of our favorite patios to dine on in Saratoga!

What’s your favorite patio to eat or grab a drink on in downtown Saratoga? Let us know in the comments!