Waldorf School of Saratoga Springs students had a very productive Earth Day! The Times Union and The Saratogian both reported that the students helped restore a 1.5-acre section of Karner blue butterfly habitat in Saratoga Spa State Park, completing a $10,000 restoration project that began last fall. 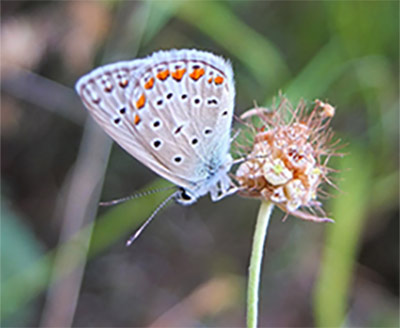 The male Karner blue butterfly is easily recognizable by its deep violet-blue wings that are fringed with white. The female is a brownish-blue with orange spots (shown in the picture above). The average wingspan of both males and females is approximately one inch.

Students and State Park workers planted wildflowers that serve as sources of food for the endangered butterflies and also act as safe havens for egg-laying. Emily DeBolt, regional parks program coordinator, told The Saratogian, “The planting of these native plants that are critical for the Karner blue butterfly’s life cycle will help complete the transformation of an aging old field into a site resembling the pitch pine, scrub oak barrens that the Karner blue calls home.”

According to the DEC, the Karner blue butterfly has been “experiencing a decline primarily due to human activities such as agriculture, urbanization, and fire suppression” and is completely extinct around many large urban centers, including Chicago and New York City. The DEC reports that the most intact populations remain in Saratoga County, which is why this habitat restoration is so important.

This part of the park was once home to many rare species of butterflies, in addition to the Karner blue, but it had recently become overrun with shrubs, bushes, and plants. In the fall, State Park naturalists removed the vegetation, and the Earth Day activity was the culmination of a restoration project that was part of an overall effort to restore some of the traditional range Karner blue’s once enjoyed.