With track season fast approaching in Saratoga Springs, it’s time to get to know NYRA’s newest race caller who will be succeeding Tom Durkin this summer. The voice of the Triple Crown and the Breeders’ Cup for NBC Sports, Larry Collmus, will be taking over as Saratoga Race Course’s newest announcer. 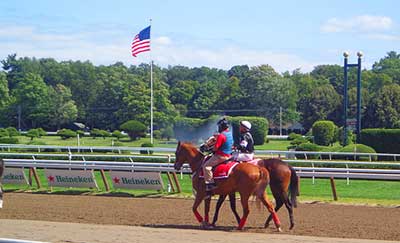 Here are a few facts about our new race caller, Larry Collmus:

A Farewell to Saratoga’s Beloved Announcer:
Tom Durkin and his famed crescendo will surely be missed by the Saratoga Race Track crowd. He brought his special brand of excitement to race fans in Saratoga since 1990. He is a native of Chicago and studied theatre at St. Norbert College. Durkin began calling races at county fairs in Wisconsin in the early 70’s including the Breeder’s Cup. He has called races at more than 50 race tracks in six countries.
Sources:
NYRA.com