NYRA’s extensive renovation plans for Saratoga Race Course were released publicly this past Monday. The overall appearance of the race course hasn’t changed much over the last 150 years, however, NYRA has plans to make modern updates to Saratoga while still maintaining its historic character. 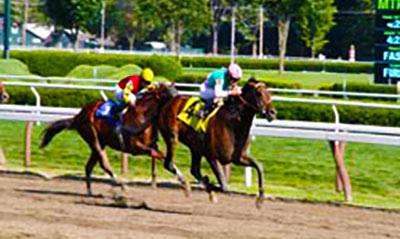 The “At The Rail” pavilion which is currently a dining tent is proposed to become a three-story, glass enclosed hospitality center with luxury boxes. There are also more plans for a new “Top of the Stretch Club” which will draw in a younger crowd, a new jockeys’ building, an entrance from Lincoln Avenue, a redesign of the paddock, a production kitchen on Nelson Avenue at Wright Street, clubhouse modifications and a new press box.

This planned expansion and modernization of the historic center piece of Saratoga has raised concerns among some in the city of Saratoga. Mayor Joanne Yepsen has offered some calming words to worried Saratogians stating that additions to the track need to blend with its old-time appeal according to the Times Union. “The historic charm and the construction of the buildings, I believe they are going to fit very nicely — based on what I’m looking at,” Yepsen stated to WNYT.
NYRA has cited Saratoga’s steadily increasing popularity compared to the two downstate tracks as the motive behind making major investments in Saratoga. With more attention being drawn to the race track, NYRA feels as though these updates will help maintain its status in a competitive market. When speaking about their plans for renovations, NYRA officials said their goal is to maintain the historic integrity of the track, which is listed on the State and National Registers of Historic Places.
What do you think about NYRA’s proposed plans for the Saratoga Race Course? Want to weigh in? Swing by the public hearing taking place on May 28th at 6:00 p.m. at the City Center.
Sources:
Daily Gazette
Times Union
WNYT