If you were wondering why there were so many kids running around Spa City this weekend, the answer is the Eighth Annual Cantina Kids Fun Run!

The event took place this past weekend in Saratoga Springs with 768 participants, and over 100 volunteers who worked together to raise $60,000 for pediatric emergency services at Saratoga Hospital, pediatric dental care and assistance to families for prescription drug costs at Saratoga Hospital’s Saratoga Community Health Center. 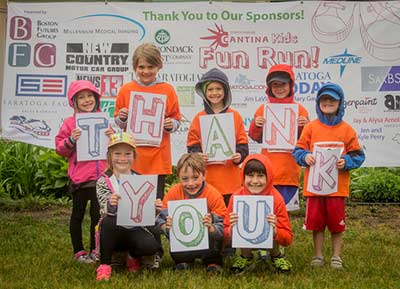 The Fun Run, which was founded by Cantina owners, Jeff and Heath Ames in 2008 have raised nearly $220,000 for pediatric care in Saratoga Springs over the last seven years. Several other organizations took part in sponsoring the event this year including 101.3 The Jockey, Millennium Medical Imaging, New Country Toyota and Saratoga eagle Sales and Service.

Bravo to Cantina for once again organizing such an incredible and fun event in Saratoga! We’re already looking forward to next year’s run.