Visit Saratoga.com For Everything Saratoga
Enter Giveaways Advertise
Home  »  Events  »  Don’t Miss Out On ‘America’s Choir’ This Monday in Saratoga!

You may already have your plans for the weekend but why not extend it for one more day? The famous Mormon Tabernacle Choir will performing at SPAC on Monday, June 29th at 7:30 P.M. as part of their Atlantic Coast Tour! The choir returns to SPAC for the first time in over ten years with a total of 600 individuals which includes 300 choir members, and one special, local guest performer. 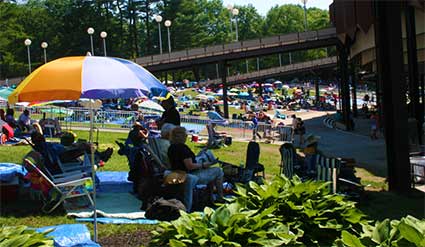 The Mormon Tabernacle Choir’s performance will include a variety of spoken word pieces and songs that were specifically selected for an outdoor venue like SPAC! The show will include repertoire from Broadway tunes, American folk hymns, American Songbook and other genres.

There will also be a special guest appearance from Saratoga Springs Mayor Joanne Yepsen. Mayor Yepsen will lead the choir in their finale piece at the end of the evening. Also, Schoharie Central Schools Choir Director, Paul Lomax, will fulfill his lifelong dream when he and some of his students sing with the choir during their rehearsal in the afternoon.
Don’t miss out on this special evening at SPAC!