A new attraction at Saratoga Race Course this year gives local racing honorees a place of their own: The Saratoga Walk of Fame. The new structure houses plaques for individuals who have been influential in the advancement of Saratoga Race Course, making significant contributions to the sport of thoroughbred racing.

“The Saratoga Walk of Fame is our way of acknowledging and recognizing these individuals for their dedication to the sport with a place to publicly enshrine their accomplishments,” said New York Racing Association CEO and President Chris Kay. “We hope our guests will enjoy Saratoga’s newest attraction which is designed to highlight the contributions of our industry’s leading pioneers and achievers for decades to come.”

The Saratoga Walk of Fame is a new covered structure, located near the carousel, that features an historic design in the classic Saratoga style, right down to the iconic turrets crowning the roof. 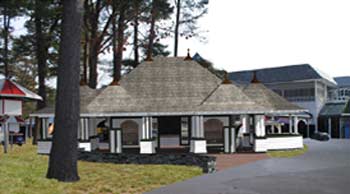 Even in its first year, the attraction will already have 6 plaques on display, with 2 more lined up to be added this season. This because, although the Saratoga Walk of Fame is new this year, it is the culmination of a tradition that actually began a couple years ago.

In 2013, NYRA began recognizing prominent thoroughbred industry owners, trainers and jockeys who have left a significant mark on Saratoga, with a commemorative plaque and iconic red Saratoga jacket on the eve of the Travers Stakes, Saratoga’s signature race and the nation’s oldest major stakes race for three-year-olds.

Now these plaques will have a permanent home in the Saratoga Walk of Fame, and this year also brings two new inductees — prominent owners Marylou Whitney of Marylou Whitney Stablesv and Ogden Mills “Dinny” Phipps of Phipps Stable.

Marylou Whitney becomes the very first female to receive this honor! Her plaque will be a welcome addition to the new attraction, detailing not only her status as a prominent local philanthropist but also her achievements in thoroughbred racing. Her career as owner and breeder through Marylou Whitney Stables has produced memorable thoroughbreds such as 2004 Belmont Stakes and Travers winner Birdstone, who himself produced two classic winners: 2009 Kentucky Derby winner Mine That Bird and 2009 three-year-old champion Summer Bird.

With roots in racing dating back to 1926, Phipps has long been an advocate for the industry as both a breeder and an owner. Thoroughbreds owned by the distinguished Phipps Stable have captured victories in some of the Spa’s most prestigious races, including the Sword Dancer Invitational, Personal Ensign, the Alabama and Travers. Earlier this year, Phipps announced his retirement as chairman of The Jockey Club after 32 years of leading the organization, establishing his tenure in the position as the longest in the history of the organization.

The new Saratoga Walk of Fame attraction will provide a permanent home for these plaques – and their narratives – where guests can learn about the honorees’ contributions to racing at Saratoga.