The Tri-City ValleyCats aren’t only fantastic baseball players… they also are renowned entertainers! The team has joined forces with Hannaford to bring their well known 3rd Annual “Show on the Road” entertainment to the Mayor’s Cup between Saratoga American and Saratoga National Little League baseball teams on June 20th.

The ValleyCats are bringing their A-game and putting together a show worthy of “The Joe” for this year’s Mayor’s Cup. The team will provide pregame fun, team introductions, a live performance of the national anthem and in-game activities such as tee-shirt tosses, pony hops and the Tri-City mayors race. 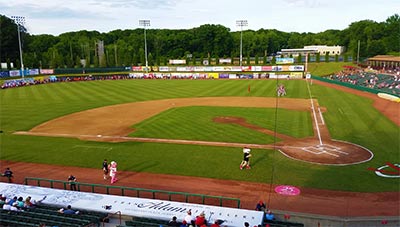 This will be a fun day that the entire community is invited to. Festivities will kick off in the afternoon with a variety of family activities including a barbecue, friendly games and mascot appearances. Hannaford will also be lending a hand to help with the picnic by showcasing healthy (and yummy!) food and snack options.
For the past 20 years, Mayor’s Cup Day has taken place at the end of Little League season. Teams from both leagues play each other throughout the course of the day to reinforce sportsmanship, character, citizenship and loyalty while the community rallies behind them and takes part in the day’s activities, as well.
These two Saratoga Springs Little Leagues serve as the outlet for youth ballplayers from age four through twelve across the community. Players, families and fans of both leagues are encouraged to join in the fun on June 20th!
We hope to see you at the Mayor’s Cup for a day of fun, food, laughs and of course, baseball!