Visit Saratoga.com For Everything Saratoga
Enter Giveaways Advertise
Home  »  Sports and Racetrack  »  New Noise Ordinance Near the Track May Go Into Effect

A new noise ordinance may go into effect in Saratoga Springs. NYRA and the city of Saratoga Springs are seeking to lower the volume of construction noise near the Oklahoma track for the safety of horses and their riders. 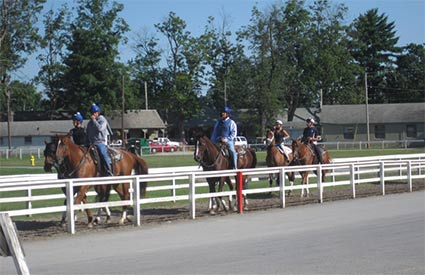 Public Safety Commissioner Christian Mathiesen told the Times Union that sound from nail guns and tools used home construction sites on the south side of Fifth Avenue can potentially scare horses and cause them to throw their riders.
Mathiesen has proposed updating the City Code so that it would restrict any construction operations that would cause disturbances to horses at the Oklahoma track between the hours of 10:00 PM and 11:00 AM between April 1 and November 30th.
Rick Violette Jr., a horse trainer and president of the New York Thoroughbred Horsemen’s Association stated to the Times Union, “I understand it’s a burden, but out of an abundance of caution, it’s a reasonable request. The racetrack didn’t suddenly pop up in these back yards. It’s been there a while.”
An August 4th public hearing is scheduled to limit the hours that construction can take place near the track.
Source:
Times Union