Visit Saratoga.com For Everything Saratoga
Enter Giveaways Advertise
Home  »  Events  »  Get Your Tickets for the 2015 Saratoga Showcase of Homes! 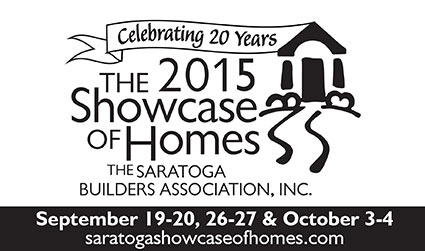 Tickets can be purchased at Adirondack Trust, Saratoga National Bank, Trustco Bank locations, Curtis Lumber in Ballston Spa and Roohan Realty on Broadway in Saratoga. You can also buy tickets online at Saratoga Showcase of Homes’ website or in person at any of the showcase homes during tour hours. Just like last year, each ticket holder will receive a free tote bag at the first home visited!

New this year to the Showcase are food trucks! Grillin’ & Chillin, Airstream Catering, Mr. Ding-A-Ling and more will be at selected showcase homes throughout the weekend. Also, a special 30-minute Saratoga Showcase of Homes TV show is currently in the works and will air on four networks in September as we get closer to the event. It will feature exclusive interviews with builders and sneak peaks of the homes!
This annual community event has contributed nearly $900,000 to local charities over the past two decades. Proceeds from the Showcase of Homes will benefit Rebuilding Together Saratoga County and Habitat for Humanity of Northern Saratoga, Warren and Washington Counties.
Get your tickets today for what is sure to be a fantastic weekend!