SPAC has just announced two very exciting performances on the lineup in 2016 for their 50th Golden Anniversary Season! 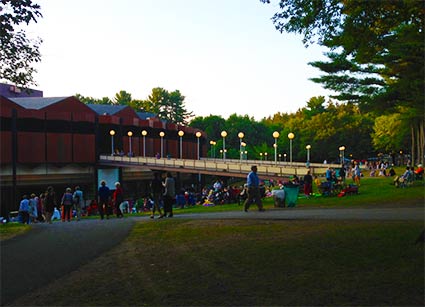 In honor of SPAC’s 50th Anniversary, The Chamber Music Society of Lincoln Center (the newest resident company to SPAC), announced a commemorative Opening Night performance of composer Aaron Copland‘s iconic masterpiece, Appalachian Spring. The 2016 presentation of the piece will mark the first live performance of the beloved American classic at SPAC.

Aaron Copland won the 1945 Pulitzer Prize for his achievement. Appalachian Spring was first performed as a ballet featuring Martha Graham at the Library of Congress in 1944 and is known for its quotations of the traditional Shaker melody, “‘Tis the gift to be Simple.”
In order to accommodate the work’s unique ensemble size during the 2016 performance, The Chamber Music Society of Lincoln Center will present the Appalachian Spring in a special collaboration with musicians from SPAC’s historic resident company, The Philadelphia Orchestra.
“I can’t think of a sweeter way to celebrate SPAC’s anniversary than to bring Appalachian Spring to life here in our venue,” President and Executive Director of SPAC, Marcia J. White, stated in a press release. She continued by saying, “The audience present for this historic SPAC premiere will experience nothing short of the very best through this remarkable collaboration between the greatest American Orchestra and the greatest American Chamber Music ensemble — performing one of the greatest American compositions.”
New Commissioned Work by Legend Michael Torke
Just before The Philadelphia Orchestra‘s finale concert at SPAC on Saturday, August 22, Marcia White announced an exciting endeavor to commemorate SPAC’s 50th Anniversary in
2016. Michael Torke, an internally acclaimed composer, has been commissioned by SPAC, Charles and Candace Wait and The Adirondack Trust Company to create an orchestral work for The Philadelphia Orchestra to premiere next year.

“Michael Torke is one of the world’s premiere composers and although his work has debuted all over the globe, his SPAC commission promises to celebrate our 50th Anniversary in a very intimate and special way,” stated White in a press release.
She added, “Torke’s longtime connections to SPAC and Saratoga are deeply personal as he has been a resident artist at Yaddo nine times and has created several commissions for New York City Ballet. He has even made a special guest appearance in the SPAC orchestral pit along with the New York City Ballet Orchestra. It is with the greatest eagerness and enthusiasm that we look forward to the premier of Michael Torke’s orchestral commemoration to SPAC.”
We are looking forward to these two renowned performances at SPAC in the coming year!