David Soman and Jacky Davis are a husband and wife team who are the creative force behind the Ladybug Girl books. The duo is stopping by Northshire Bookstore on Monday, October 26th to read excerpts from their books! We were lucky enough to chat with the couple about their upcoming visit to Saratoga. Check it out: 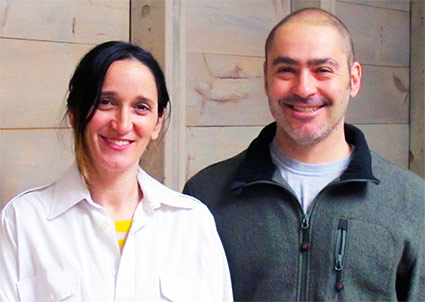 Would you mind telling our audience both of your backgrounds? Were you two always writing? David, did you always have a career in illustration?

David: I’ve been working as an illustrator since I graduated college.
Jacky: That was a very, very long time ago.
David: Back in the stone age! I didn’t start writing until we wrote the first Ladybug Girl book together.
Jacky: I had worked in publishing and in children’s books a little bit. I also had been in children’s television. I grew up in Minneapolis, Minnesota and moved to New York after college.
How was Ladybug Girl “born?”
David: We have a daughter named Lucy and when she was about two years old, she came downstairs from her room dressed in a tutu, ladybug wings, 20 necklaces, ten hats and little rain boots. Jacky and I had been talking off and on about trying to do a project together at that time. I had been doing little crayon drawings of Lucy and we had a stylized character. When she came down the stairs, Jacky said, “Hi Ladybug Girl!” and we both just looked at each other and thought, it’s a good name. From there, we conceptualized a story.
Was this your first collaborative project together?
Jacky: Yes, besides having a child!
Could you walk us through your process as a duo when it comes to envisioning a new story for Ladybug Girl? I know your daughter is somewhat involved!
David: Yes, she is sometimes involved! For Ladybug Girl At The Beach, we had been talking about wanting to do something with fear and being brave. Lucy came up with the beach idea.
Jacky: Being parents, and at the time you know, as new parents, we would be spending time at the playground and on playdates and really immersed in the world of our daughter. We had a son two years later. We are really a part of the world of children dynamics and how they play and how they work through everyday conflict. So, you know, we were inspired by the various things they were dealing with on a day to day basis. Also, we’re inspired by where we live. The Hudson Valley is very beautiful and spending a lot of time playing outdoors came into the book as well.
What kinds of themes do you try and incorporate into the books? Does it vary from story to story?
David: The themes come out of how little kids try to go through their everyday existence. They encounter so many things for the first time. They have so many basic things they need to hear and understand and work through. What we try to do in the books is have our characters deal with the same things our kids deal with. Whether it’s saying sorry, or being brave or independent, or working through the difficulties of a playdate. The things sort of come out of thinking about what a day in the life is like for a child and what are the things they encounter. Then, we try to make a story out of those small, small events. Everything is big to a child.
What do your have in store for us at the Northshire Bookstore on Monday?
David: A party! What we like to do is read a couple of the books. The original Ladybug Girl was just reissued and it’s a really fun story.
Jacky: The newest edition includes stickers and a fun poster is in the jacket!
David: I also do a little bit of drawing with the kids. I show them how I draw Ladybug Girl.
Jacky: We talk a little bit about how we work on a book together. Then we answer questions and kids tell us things about their lives.
Have you ever been to Saratoga before?

David: We have, we were with the kids! We were coming back from Vermont, I believe. It was a really nice little city.

Thank you to David and Jacky for taking time out of their busy schedules to speak with me. The team at Saratoga.com is thrilled they are visiting our city, and we can’t wait to see what new adventures await Ladybug Girl.