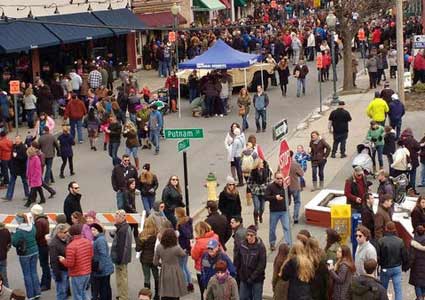 According to the US Census, Saratoga County’s population grew by 2.7% between 2010 and 2015, making it the second-biggest growth rate for any Upstate New York county. Only Tompkins County, where Ithaca is, beat out Saratoga with a 3% growth rate.

Furthermore, Halfmoon of Southern Saratoga County is the second-fastest growing municipality in Upstate New York, with their population increasing by nearly 10% during the last five years; Amherst in Erie County was number one.
For the major cities in the area, Saratoga Springs had a 4.4% increase and Albany a .75% increase; Troy saw decrease of .3% and Schenectady had a decrease of 1.28%.
Although that might seem harsh for Troy and Schenectady, the shrinking in numbers actually follows most of the rest of the state. While New York State as a whole saw a population increase of 2% between 2010 and 2015, most counties actually decreased in numbers over this time frame.
The fact that most New York State counties are decreasing in population only makes Saratoga’s increase that much more impressive. With great cultural attractions like the Saratoga Race Track and the Saratoga Performing Arts Center – and the highly anticipated Saratoga Casino Hotel opening soon – it’s no wonder the city and the county at large is an attractive area to settle down in.
Source: