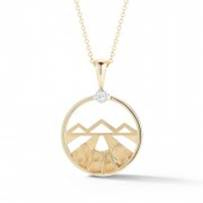 Image provided by SPAC
The pendants are available in sterling silver and 14k gold, and capture the breathtaking majesty of SPAC’s signature architectural structure as well as the tranquil outdoor setting that is so iconic. The pendants can be customized and engraved on the back, and a beautiful diamond gemstone can also be included at the top of the gold pendant to symbolize the moon shimmering over the venue during a concert or performance.
“As a kid growing up in Saratoga, I have fond memories of attending SPAC for some of my favorite artists,” Evan deJonghe, manager and jewelry designer at deJonghe Original Jewelry, revealed in a statement. “And one of my strongest memories about the venue is the expansive lawn overlooking the iconic amphitheater. This was our inspiration for our design.”
During each of the three performances of Jewels by the New York City Ballet at SPAC in July, one lucky audience member will be selected to win a one-of-a-kind pendant. Balletgoers can enter the pendant raffle prior to the start of each performance.
The venue itself is overjoyed at the outpouring of support from businesses in the community. Marcia J. White, Executive Director and President of SPAC, said in a statement, “The partnership that local organizations like deJonghe Original Jewelry have shown to SPAC during this milestone anniversary year has been remarkable.”
25% of all pendant sales will be donated to support SPAC’s 50th Anniversary programming. Tickets to Jewels are now available at www.spac.org and by calling the Box Office at 518-584-9330.