There’s a fantastic short film festival, one of the premier races for older horses, and six more fun events happening this weekend in Saratoga! 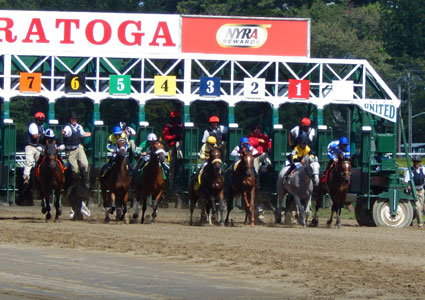 This Friday and Sunday at Whitney Field, catch the final matches of the Saratoga Polo Association’s Whitney Cup Tournament.

You won’t want to miss the 9th annual Ballston Spa Film Festival! This year, there will be 38 short films created by young filmmakers from around the world.

“Unconquered,” the special orchestral piece created by Michael Torke for SPAC’s 50th anniversary, will premiere this Friday at a performance by the Philadelphia Orchestra. The orchestra will return to SPAC the next day and perform during a screening of Disney and Pixar’s Ratatouille.

The $1.25 Million Whitney Stakes is the main event this week at the Saratoga Race Course. The event is recognized as one of North America’s top races for older horses on the dirt.

Take the kids over to Maple Avenue Middle School for Big Truck Day. Trucks of all shapes and sizes will be featured, and funds raised will go toward the Children’s Museum.

While the Summer Olympics are at Rio, Spa State Park will host a different set of games. Check out the Labatt Blue Undomesticated Summer Games, an outdoor competition like no other!

The Saratoga Auto Museum will host the Hemmings Sports & Exotic Car Show this Saturday. Register your car, or come by and take a tour during the show!