Don’t let the end of summer get you down! Enjoy the final weekend of the season at the popular Irish 2000 Music & Arts Festival, two Harvest Fests, and many more great events happening in and around Saratoga! 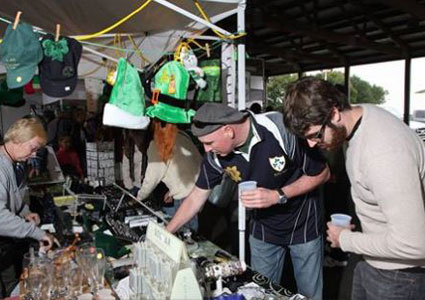 The first weekend of this year’s Saratoga Showcase of Homes will take place this Saturday and Sunday. Tickets for this fantastic self-guided tour of the area’s finest homes are $20 each for adults, and children under 12 are free.

Anniversary Encampment at the Saratoga Battlefield

Experience a living history event this weekend at the Saratoga Battlefield! A Revolutionary War living history encampment will be set up to mark the 239th anniversary of the Battle of Saratoga.

The all new Saratoga Springs International Film Festival will be held at multiple venues in the city. Starting at 9:00AM, you’ll be able to watch local, national, and international short films and features. Ticket prices vary for each screening, and they will be available at the door while supplies last.

Take a drive to many working farms in the Clifton Park area as part of the 24th Annual Clifton Park Farm Fest! Participating farms will be open to the public for apple picking, horse rides, festival music, and more!

Visit the Polo Field at the Saratoga Casino Hotel for the Food Truck and Classic Car Festival! Throughout the afternoon, there will be celebrity appearances from Adam Ferrara of “Top Gear” and Sara Moulton of “Sara’s Weeknight Meals.”

Bring the kids over to St. Paul’s Lutheran Church in Saratoga Springs for a Family Fun Day this Saturday! From 1:00PM-4:00PM, check out the bounce house, dunk tank, and carnival games. The cost of admission is $3 per child and $2 per adult.

At the Saratoga Winery, stop by between 5:00PM-midnight for a ScaryToga Harvest Moon Festival. Spend the evening participating in paranormal investigations, ghost tours, and more. You must be 21 or older to participate. Admission is $10 in advance or $13 at the door.

Local businesses on Henry Street in Downtown Saratoga will be hosting the 7th Annual Henry Street Harvest Festival this Sunday! From 12:00PM-4:00PM, walk down the street for live music, food, pumpkin painting, and other fun activities.

Art In The Park

Art In The Park will feature artists from all over the area displaying and selling their artworks in Congress Park. The event will also include great food, a Kidz Art Zone, and local music.

The Saratoga Palio Melanie Merola O’Donnell Memorial Race will take place around Broadway and Congress Park in Downtown Saratoga. Although registration is closed for this year, be sure to get an early start when registration opens for next year’s race.