About four months ago, a majority of Saratoga Springs city officials voted in favor of implementing a sidewalk sitting ban. Since then, sitting on a city sidewalk has resulted in warnings or fines in most situations. However, the future of the ban is uncertain because the New York Civil Liberties Union is investigating its discriminatory nature. 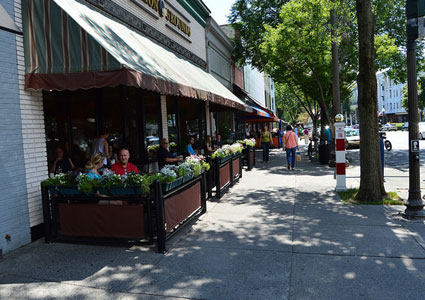 Back in June, the Saratoga Springs sidewalk sitting ban received a 4-1 vote of approval from city officials, and only Mayor Joanne Yepsen voted against it. Yepsen believed the fines for sitting on a sidewalk were too steep.

The ban dictates that if you sit on a city sidewalk, then you’ll receive a warning at first. Following that, any more offenses could lead to $100+ in fines, 10 days in jail, or a misdemeanor charge. There are a few exceptions, such as emergencies.

Supporters of the sidewalk sitting ban have argued that it represents a protective measure for the local community. For them, the ban discourages people from sitting or lying on the sidewalk, clearing up room and making the walkways safer.

On the other hand, the ban has had its detractors as well. When it was introduced, some members of the public felt it unfairly criminalized the homeless. Rather than create more problems through the ban, there were arguments in favor of finding ways to help the homeless.

The ban has been in effect for four months, but now, the New York Civil Liberties Union has announced that it believes the ban is discriminatory. According to a News 10 article, the Union reinforced its stance that:

1. Courts have recognized “public streets and sidewalks as forums for free speech and peaceable assembly”
2. Homelessness is not a crime, and the sidewalk ban does criminalize the homeless

What this means for the ban is that the New York Civil Liberties Union will investigate it and work with city officials to determine what the future of the ban should be.

Do you believe the sidewalk sitting ban should remain?