Autumn is in full swing in Saratoga Springs, and during this time of year, there are always plenty of things to do downtown and in the surrounding region. Check out what’s happening this Columbus Day weekend, and enjoy a local wing off, fall festivals, and so much more! 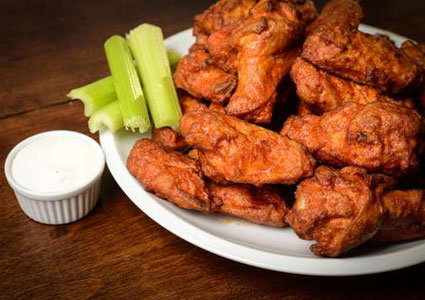 From 11:00AM-4:00PM, you’ll be able to enjoy a world of flavors in Downtown Saratoga at the Saratoga International Flavorfeast. The event is free to attend, and samples from each participating restaurant and vendor will only cost $1.

The Saratoga Winery will host a four-day Fall Fest Weekend celebration featuring beer & wine specials, hard ciders, fall beers, and even apple cider mimosas. Admission is free, and there will be live music, tastings, and more over the course of the long weekend.

In celebration of Ulysses S. Grant, the NYS Military Museum will host Grant’s Grand Ball this Friday evening. The event will feature a tour of the museum, a grand march, and a colorful musical tribute by the Union Army Generals – a Civil War living history group. Tickets are $50 per person.

Get ready for Druthers’ beer & music festival at the Universal Preservation Hall! The festival will showcase 8 different artists under one roof, including the popular North and South Dakotas. Food and beer will be provided by Druthers. General music tickets cost $20, and VIP tickets cost $40.

Beer, wine, authentic German food, and more will be offered at the 3rd annual Elktoberfest at the Clifton Park Elks Lodge. Fun games and raffles will take place throughout the day. For $15, you will be able to participate in six tastings and receive a commemorative glass. The cost for senior citizens will only be $10.

The first ever Schuylerville Fall Festival is set to take place at multiple sites and businesses in Historic Downtown Schuylerville. Take a look at the music schedule, and check out the vendors, street musicians, and more!

The 10th annual Falling Leaves 5K & Kids’ Fun Run will take place at Kelley Park in Ballston Spa on Saturday morning. Race-day registration will be $30, and the Kid’s Fun Run will be free. The races will kick off at 10:00AM.

“The Way We Were” Car Show

Hundreds of classic cars will be featured along Front Street in Ballston Spa during “The Way We Were” Car Show. Families will be able to enjoy live music, food, and activities at the free car show.

Take the family to the National Museum of Racing Hall of Fame for a free evening of arts and entertainment. Explore the world of thoroughbred racing through the eyes of backstretch workers and professional artists. Children will be able to enjoy a pint-sized horse stable and other activities.

Art in the Park at the Saratoga Battlefield

Whether you’re an amateur or professional artist, you’re sure to enjoy Art in the Park at the Saratoga Battlefield. From 10:00AM-4:00PM, artists who check in at the visitor center will receive a free day pass to draw and paint at the historic site. Don’t forget your supplies!

From Nightmares at Liberty Ridge Farm to Double M Haunted Hayrides, there are many ways to celebrate Halloween early this fall in Saratoga!