It’s much more than a coffeehouse – it’s a center for culture and music. Caffe Lena, under construction for the past six months, has seen legends like Bob Dylan, Ani DiFranco, Arlo Guthrie, Joan Baez, Don McLean, and many others perform since its opening day in 1960.

Fortunately for local music lovers of folk, jazz, bluegrass, and acoustic pop, Caffe Lena is set to reopen this week! Here are the details of what’s new and improved at this intimate performance venue that is widely known as the longest continuously operating folk music venue in the country. 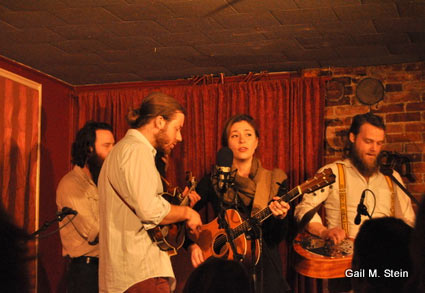 In January of 2016, Caffe Lena announced its capital campaign and partnership with Bonacio Construction for a $2 million renovation program. Construction began in June to expand and improve upon the coffee shop.

Caffe Lena will be back in business officially this Friday, December 30th, with an already-sold-out performance by The Suitcase Junket.

While under renovations, Caffe Lena presented shows at other venues in the area, such as The Grove at Neumann. The fact that they’re ready to reopen just six months after starting construction is nothing short of amazing.

“It feels extremely huge,” Sarah Craig, Executive Director of Caffe Lena, told the Times Union. “It’s a rebirth of the venue.” Craig indicated the performance venue is aiming to be more in line with what other major music venues offer, with more space and better accommodations.

Currently, $1.5 million has been raised or pledged towards the $2 million budget. Bonacio Construction has been a huge part of this – the company donated about $100,000 to the campaign, did some of the work at cost, and they also covered a $350,000 expense of a new entryway.

Craig expects a grand opening next spring when the rest of the fundraising should be wrapped up, along with the remaining renovations.

A large focus of the renovations has been to make Caffe Lena more handicapped accessible, including an elevator, which will be shared by the club and a new, four-story structure being built by Bonacio Construction next door.

“For us, one of the really driving, urgent reasons for taking on this project was to make this historic space handicapped accessible,” Craig told the Times Union. “There are a lot of people who love our music who have never been able to come here before, and we wanted to be able to bring them into the real Caffe Lena rather than moving to some other site and starting fresh. And having that elevator is really important.”

The restrooms have also been made handicapped accessible. Additionally, Caffe Lena is more spacious than ever before, which is an ideal improvement for both handicapped individuals and other patrons alike.

The entrance way and lobby have been renovated to include a large gathering space for guests to mingle and chat or share memories, and roomier staircases are in the process of being installed.

Prior to this project, the kitchen was not set up to prepare food for dozens of people in a short amount of time. It was also cumbersome to deliver food to patrons, with the waitstaff having to essentially squeeze past a sound man in a small hallway to get to the guests.

But that’s all going to be changed now. The more spacious and efficient floor plan is expected to increase the effectiveness of table service.

More importantly, the new kitchen has a three-bay sink, the best appliances, and a new dishwasher, which the old kitchen was lacking.

Guests can expect a new and improved menu as a result of this new kitchen, with light fare and desserts. They’ll still offer favorites like chili and chocolate chip cookies, which are made according to founder Lena Spencer’s original recipe.

Beverages will be offered like coffees, teas, and iced soft drinks as before, but there will also now be beer, wine, and hard cider on the menu.

Other aspects of the renovation include increased seating and better views and headroom in the performance room, a new and improved sound system, and modernized artist and administrative spaces.

Construction on the club is finished, but Bonacio Construction will still be working for another six months on the adjacent building, including the shared elevators and stairs.

Because of all these improvements and better accommodations, Caffe Lena is planning to increase their calendar of performances by 30%! Shows will be performed on Thursday through Sunday evenings, and will include well-established artists as well as up-and-coming performers.

You can check out their upcoming schedule for shows here.