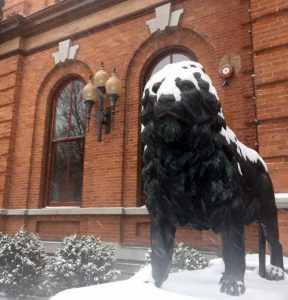 Saratoga Springs will finally have a permanent home for the Code Blue shelter thanks to the generous contributions of Ed and Lisa Mitzen, along with other members of the Saratoga community.

On Valentine’s Day, Mayor Joanne Yepsen met with the Mitzens, Saratoga Shelters director Mike Finocchi, and Mike Ingersoll of the LA Group to discuss the new two story building at 14 Walworth, the current site of Shelters of Saratoga.

Construction plans for the new two story building call for a fully-equipped kitchen, laundry room, men’s and women’s sleeping rooms, multiple showers and bathrooms, a large storage area for donated food and clothing, and a Code Blue office. Construction and permitting will be handled by Bonacio Construction with assistance from the LA Group. Neither business will profit from the job.

Mayor Yepsen is hopeful that the building will be ready by next winter. In a statement, Yepsen said, “Since the inception of Code Blue, the generosity of the Mitzen family and others in the community has been incredible. The proposed plan gives Code Blue a permanent home, as opposed to its current revolving status, which will be critical to ending homelessness in Saratoga Springs. I am so proud of the support our community has displayed since we first opened Code Blue four years ago, and I thank the Mitzens and all others involved for making our long-term goal a reality.”