Want to know the latest on Saratoga restaurants? We’ve rounded up the most recent happenings in the Spa City: a new restaurant is now open in the Adelphi Hotel, another is expected to open in early 2018, a new food service is being created for an existing bar, and one of our favorite Broadway restaurants is expanding to a larger location. 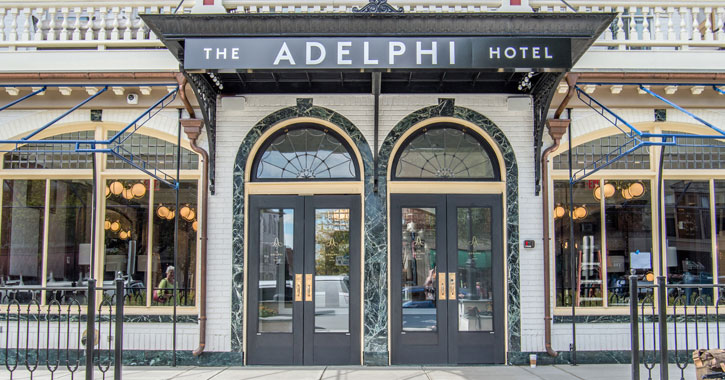 The recently renovated Adelphi Hotel’s new restaurant The Blue Hen is now open for breakfast and dinner. The eatery serves contemporary and seasonal food, created from high-quality, locally sourced ingredients. You can expect a creative twist on classic dishes.

The restaurant can hold 60 people and is housed in a 1,200-square-foot, glass-walled conservatory, giving it an open, airy feel.

“The combination of the abundance of fresh ingredients available in the region, the culinary skills of Executive Chef Braden Reardon and his Chef de Cuisine Marc Plessis, and the extraordinary setting will quickly make The Blue Hen a favorite for locals and guests around the world,” Simon Mildé, Managing Partner of Adelphi Hospitality Group, said in a statement.

The name of the restaurant was inspired in part by the Blue Toed Hen, a reputable establishment that once existed near the Adelphi Hotel.

A rustic tavern with authentic Italian meals is currently in the works – Jeff and Patty Novo plan to open Taverna Novo at the former location of Beekman Bistro in early 2018. Taverna Novo will be cozy and intimate, with seating for about 50 people.

Patty Novo told The Saratogian that in Italy, tavernas are typically found in mountainous regions and serve as a place for travelers to stop for a hearty meal and drink.

“It’s kind of like a welcome respite to the outside, and that’s what we want this place to be,” she said. “A place where people can stop and feel comfortable.”

The menu is expected to include pizzas from a top-notch wood-fired oven, a variety of pastas, and other Italian dishes, with some gluten-free options as well. Specials will rotate in part based on local availability.

It appears that wine will be a big focus of the restaurant, with a wine list consisting of boutique California and Italian selections. The Novos previously owned Crush & Cask Wine & Spirits on South Broadway, so they bring their knowledge of this industry with them into this venture.

In fact, Patty Novo is a certified specialist of wine through the Society of Wine Educators and a Guild of Sommeliers certified culinarian.

If you’re a wine enthusiast who loves Italian food, this just might be your next Saratoga hotspot!

Sinclair Saratoga is a bar, beer garden, and game room that opened just this past summer. Brady Duhame, who was most recently head chef at 15 Church, is creating Buddha Noodle, which will serve as the food aspect of Sinclair Saratoga. Buddha Noodle will consist of contemporary Asian dishes.

Duhame has a varied culinary background, having headed up top kitchens in New York City and Europe. Locally, in addition to 15 Church, he’s served as Director of Culinary Operations for Saratoga Hospitality Group and has worked at Angelo’s Prime Bar + Grill in Clifton Park.

Buddha Noodle is expected to open on December 15th.

A New, Larger Location for Cantina

Jeff Ames, owner of the popular Mexican restaurant Cantina, has purchased the former Lillian’s Restaurant on Broadway for $2.2 million. Plans are in development for this new, larger space to house Cantina.

The restaurant will encompass two floors, with a kitchen, bar, and dining area downstairs, and a catering kitchen, open seating, and an event space on the second floor. Ames is also planning to make improvements to the interior and the exterior of the building, with new lighting, trim work, paint, and more.

Ames bought the building from CEO and President of nfrastructure Dan Pickett III and his wife Jennifer; the couple had purchased the building for $2.45 million – $250,000 more than what Ames paid for it – just last year.

With nfrastructure being sold to Zones Inc., and having added 1,000 employees in the Albany area, Pickett reportedly didn’t have as much time for the Broadway building as he’d been hoping. His wife found herself immersed in other projects as well.

“Jen and I have always loved Cantina, but didn’t know Jeff,” Pickett told the Albany Business Review. “We had a mutual friend and he made the introduction. We’ve always believed the location deserved something special and from the beginning we thought Jeff and Cantina were the perfect fit.”

In the meantime, Cantina is continuing operations at its current location, which is also on Broadway.