This June, an exciting new music festival will be held in Saratoga Springs at Skidmore’s Arthur Zankel Music Center – the Mostly Modern Festival! This unique, multi-day festival will focus on the music of our time and present eight concerts featuring a wide range of guest artists and ensembles, an orchestra largely consisting of Mostly Modern Festival Institute (MMFI) participants, and much more. 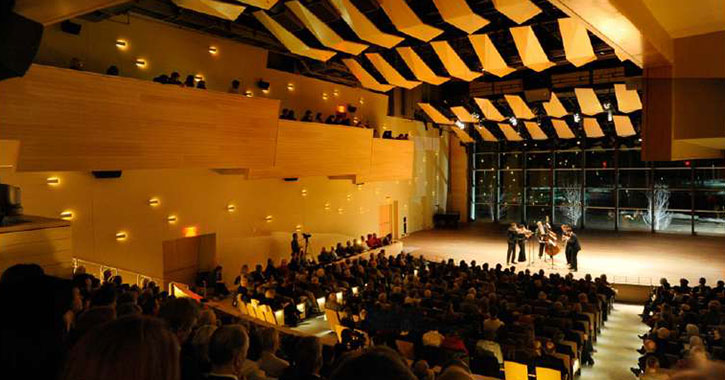 What is the Mostly Modern Festival?

The Mostly Modern Festival was founded by the husband and wife team of composer Robert Paterson and violinist Victoria Paterson. Their goal was to create a contemporary music version of the traditional summer festival experience that allows audiences to enjoy new and fresh sounds.

What are the Program Highlights?

From June 8-18, 2018, the Mostly Modern Festival will feature eight concerts by festival and guest ensembles, and the MMFI. Not only that, but there will be over 30 world premieres of new works by MMFI participant composers, such as William Anderson, Kyle Brown, Kenneth Eggert, Nicholas Fife William Hawkins, and many others.

Tickets for each concert will cost $20 for general admission and $10 for students. A Mostly Modern “Insider Pass” will include admission to all the concerts and free admission to the opening and closing night parties (June 7 and June 17).

These public performances will be professionally videotaped, and the videos will be made available to participants afterwards. The concerts may also be streamed live.

Get ready to experience fresh and modern works at the Mostly Modern Festival!