This article is sponsored by Saratoga County Fair.

Details have been announced for this year’s Saratoga County Fair, which is scheduled for Tuesday, July 24th through Sunday, July 29th. Trust us, you will not be disappointed by this year’s lineup!

Fair organizers always do a fantastic job of keeping the favorites that returning fairgoers look forward to each year, while adding a slew of brand new entertainment, shows, food, and more. See what’s on the slate for this year! 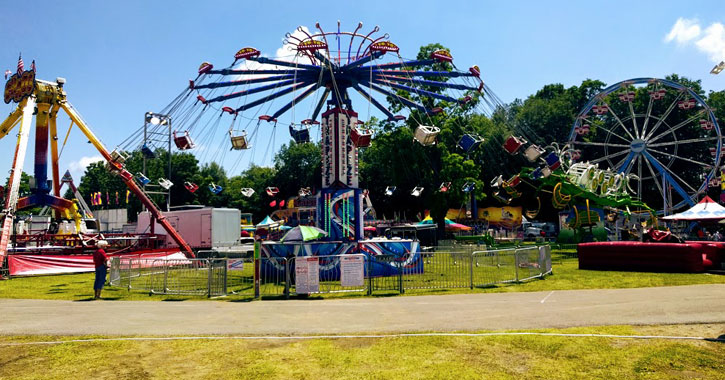 You can look forward to the following brand new shows, acts, rides and brews at the fair this year!

The World of Wonders is the last traveling amusement sideshow in the whole country, and you can see it right here at the Saratoga County Fair.

Jason Tardy combines high-energy juggling with offbeat comedy for a super fun show. He’s performed on Carnival Cruises and has appeared on America’s Got Talent.

Brand new rides at the Midway this year include the Drop Tower and the Back Spin Coaster.

New Microbrew to be Released

Since 2014, the Fair has made it a tradition to produce a limited release microbrew that’s exclusively available to fair patrons.

This year, the fair’s microbrew comes from Artisanal Brew Works and it will be brewed just minutes from the fairground. Keep an eye out for it during Fair week!

Back by Popular Demand

You loved it, so the Fair kept it on the roster for the 2018 season! Check out what returning favorites you can expect this year.

Come cheer your favorite pig on at Rosaire’s Royal Racers, returning to the fair after a two-year hiatus! Pigs race around a 180-foot tall, all-aluminum track in about seven seconds.

“Pig Rooters” from the audience are picked to represent each pig and possibly win free prizes.

Lance Gifford, a renowned magician in the US for over three decades, will present three magic shows every single day of the fair on the Grandstand Meadow Stage.

Then, each evening he’ll be delivering his award-winning hypnosis act in the Trustco Talent Building. You’ll just have to see this one to believe it!

In addition to the slew of fun farm animals you can always catch at the fair, you’ll definitely have to make a stop at the Eudora Farms Traveling Exotic Zoo. If you haven’t checked this out at the fair yet make sure to do so – this is an educational and interactive animal adventure with everything from antelopes to zebras and much more.

Masters of the Chainsaw

Brian Ruth travels up and down the East Coast with his impressive Masters of the Chainsaw show. Watch him carve tree trunks into bears, eagles, raccoons, and other woodland creatures.

And, on Saturday night, all the chainsaw carvings from throughout the week will be up for auction to the highest bidder, so you’ll even get a chance to take home one of these great creations for yourself!

Nine of the Fair’s food vendors this year have been featured on the Food Channel’s Carnival Eats show, so you know you’re in for some delicious fair grub!

New this year, you can look forward to cookie dough, barbecue sandwiches, churros, and freshly-baked chocolate chip cookies. And, how does a deep-fried Twinkie stuffed with Twix and wrapped in bacon sound?

You can also get ready for chicken-bacon-ranch calzones, sno-cones, funnel cakes, sausage sandwiches, cotton candy in a rainbow of colors, freshly made lemonade, and more.

Adventurous fairgoers will have to stop by the Midway, open each day from noon to midnight, for rides like Rock n Roll, The Pharaoh’s Fury (swinging passengers 55 feet into the air), and the Giant Gondola Wheel. Kiddieland will provide a place for modern attractions that young children can enjoy.

The fair really comes alive at the Grandstand, with the rodeo, demolition derbies, and tractor and truck pulls.

In the Coors Light/Fox 23 Live Music Pavilion, regional bands will be playing every afternoon and evening. Tuesday through Friday afternoons Rick Bolton & Friends will be performing, and on Saturday and Sunday afternoons you can look forward to the Spurs USA.

Evenings in the Live Music Pavilion will feature:

The Saratoga County Fair doesn’t just entertain – it educates the public on the great variety of agricultural activities and resources in the area. The Fair just wouldn’t be the same without all the 4-H exhibits, competitions, and demonstrations. There will be multiple opportunities to learn more about agricultural practices, animal care, gardening, and many other areas.

Mark your calendars for July 24th through the 29th and make sure to get your fair fix at the Saratoga County Fair!