Summer is still a few weeks away, but the fairs and festive events are starting now! Make your way to Saratoga Springs this weekend for the annual Beekman Street Arts Fair, Flag Day Parade, and much more! 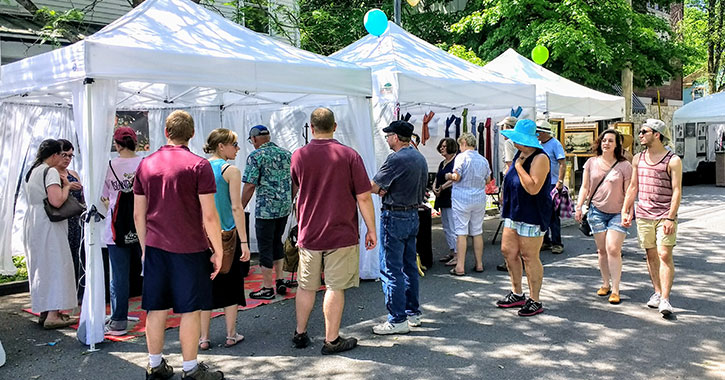 Take a walk through downtown Saratoga and over to Beekman Street for the annual Arts Fair on Sunday from 10:00am-5:00pm. This one-day fun day will feature a juried art and craft show, musical groups, street performers, food trucks, and more.

Celebrate Flag Day in downtown Saratoga as the Saratoga-Wilton Elks Lodge #161 hosts their annual Flag Day Parade! On Saturday, the parade will begin on North Broadway at 12:00pm and make its way to Congress Park.

Come shop for hidden treasures, clothes, antiques, and more at the annual Ballston Spa Village Wide Garage Sale! There will be garage sales all around the area on both Saturday and Sunday.

The all new Mostly Modern Festival in Saratoga Springs will take place at Skidmore College’s Arthur Zankel Music Center. This music festival will feature eight concerts that celebrate modern composers and the music of our time.

Ready to laugh all night long? Get your ticket to Saratoga Winery’s Comedy Show on Saturday night at 9:00pm! The show will feature comedians Alex Giampapa and Shawn Gillie, as well as headliner Orlando Baxter.

Join Opera Saratoga on Sunday as members of their Young Artist Program celebrate the legacy of Leonard Bernstein at the Carriage House in Rock City Falls. At 2:00pm or 7:30pm, attendees will enjoy seating at cabaret style tables as Opera Saratoga presents a live performance.

Blues for the Karner Blues: A Free Concert at Camp Saratoga – Sunday, June 10

Stop by Camp Saratoga on Sunday from 2:00pm-4:00pm for a free concert featuring great blues music from The Resonators. This special event will be held rain or shine.