You don’t have to be a baseball fan to appreciate the likes of Boston Red Sox baseball legend David Ortiz, whose warm and outsized personality made him a big hit at the Saratoga Wine & Food Festival last year. The slugger made such a big impression that organizers have gleefully brought him back for the 2018 rendition, which runs September 7-9.

Ortiz can be seen at Friday’s Fired Up! event, and will also meet and greet guests at a VIP event, where his Arias wines collection will be highlighted. A portion of ticket sales will go to Ortiz’s kids charity. 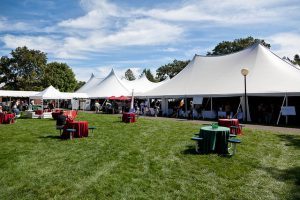 For foodies, the cleanup hitters for this big-time food and wine event will be James Beard Award-winning chef, David Burke, and celebrity chef and Emmy-nominated TV star Todd English.

In addition to his Food Network stardom and restaurants in Manhattan, Chicago and Las Vegas, Burke is the new Culinary Director of The Adelphi Hotel and Salt & Char in Saratoga.

Elizabeth Sobol, president & CEO of Saratoga Performing Arts Center, said in a statement that with the added presence of celebrity chefs Burke and English, “the festival will be a feast for the senses with curated gourmet food and wine tastings and entertainment from our charismatic hosts.”

Adding more hoopla to the 2018 Saratoga Wine and Food Festival is the International Bugatti Tour that will also make a heralded pitstop in the Spa City that weekend, in partnership with the Saratoga Automobile Museum.

An estimated 160 drivers and 80 luxury Bugatti automobiles will pump up the volume in this rare event. The Bugatti rally comes to the United States only once every 10 years. This is its first stop eve in New York state.

Top events for this year’s extravaganza include:

A VIP Grand Tasting ticket, which allows earlier entry to the Grand Tasting and exclusive access to the VIP area, is available for $175.

Find a place to stay during the Wine & Food Festival >>