Walking Tours Return to The Track to Honor 150 Years

The Saratoga 150 festival brought an abundance of great events and activities to Saratoga and the Saratoga Race Course!

In honor of this monumental event, NYRA announced that front side walking tours would be available throughout the 2013 racing season for the first time since 2000.

The tours highlighted track landscaping, historical highlights, as well as architectural features and the history behind them. 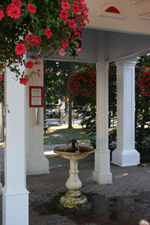 The tours lasted approximately 45 minutes and were led by seasoned track professionals with a vast knowledge of the track and the 150 years of rich history behind this cherished Saratoga gem.

Tours were $3 per person or $10 for a group of four, and each participant received a free Saratoga Race Course commemorative item.