Maestro’s is one of our favorite places to grab a drink and sit outside while watching tourists and Saratogians stroll up and down Broadway. They offer a great cheese, cracker and charcuterie spread in the bar area that hits the spot if you need something to nosh on, and their location on Broadway makes for great outdoor seating. Recently we ordered the lamb lollipops (My previous write up can be read here) as an app before heading out to dinner with friends on Saratoga Lake. The lamb lollipops were excellent which led us to believe that their dinners would be just as good if not better. After a summer packed with weekends away and prior obligations, we were finally able to find a free Saturday to dine at Maestro’s. I have to say that I was pretty excited since our first experience was so good. Not only was the lamb exceptional, the bread, white bean dip and dark chocolate bark we had was also fantastic. We were thinking that this was the tip of the ice-berg and that our dining experience would be even better. Unfortunately, that wasn’t the case. We arrived to a packed dining room but were offered seating outside amongst many gas patio heaters and fleece blankets on the back of the chairs. 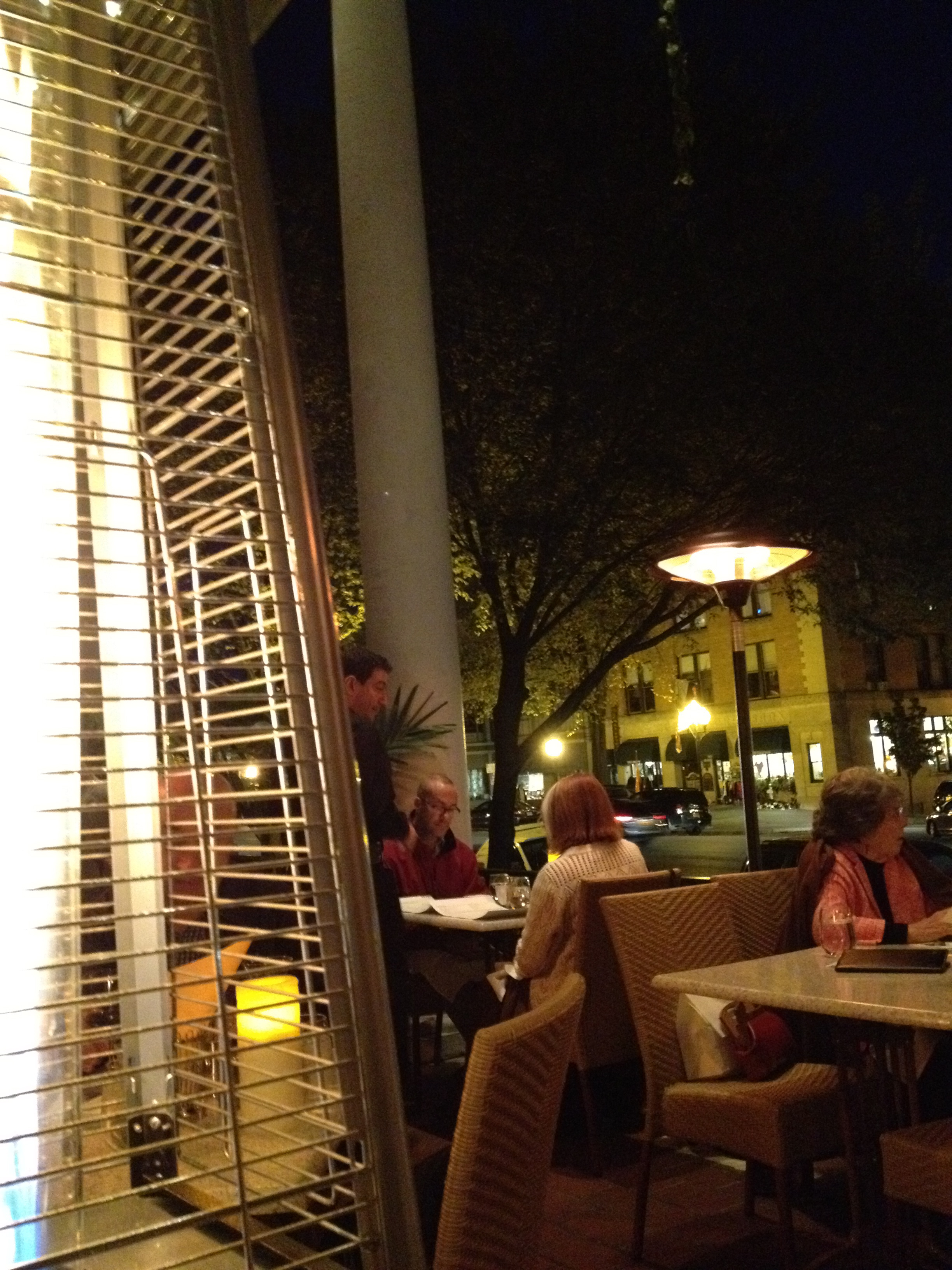 It was actually pretty cozy and if I could squeeze in one more al fresco dining experience, I’m in! The house Sauvignon Blanc (The Crossings from New Zealand) is not only delicious, but serves as a good way to stay warm as well. After enjoying some of the white bean dip and warm bread, we were ready to order. I thought I was going to go with the Prix Fixe since the options that were online looked great. I had my eye on the duck and white bean sausage as an app along with a great looking salmon dish that came with kale and a potato pancake but both were no longer an option. I opted for the Salmon burger as an alternative and the pumpkin raviolis as an appetizer. My husband ordered the five-onion bisque and butternut chicken risotto as his entree. 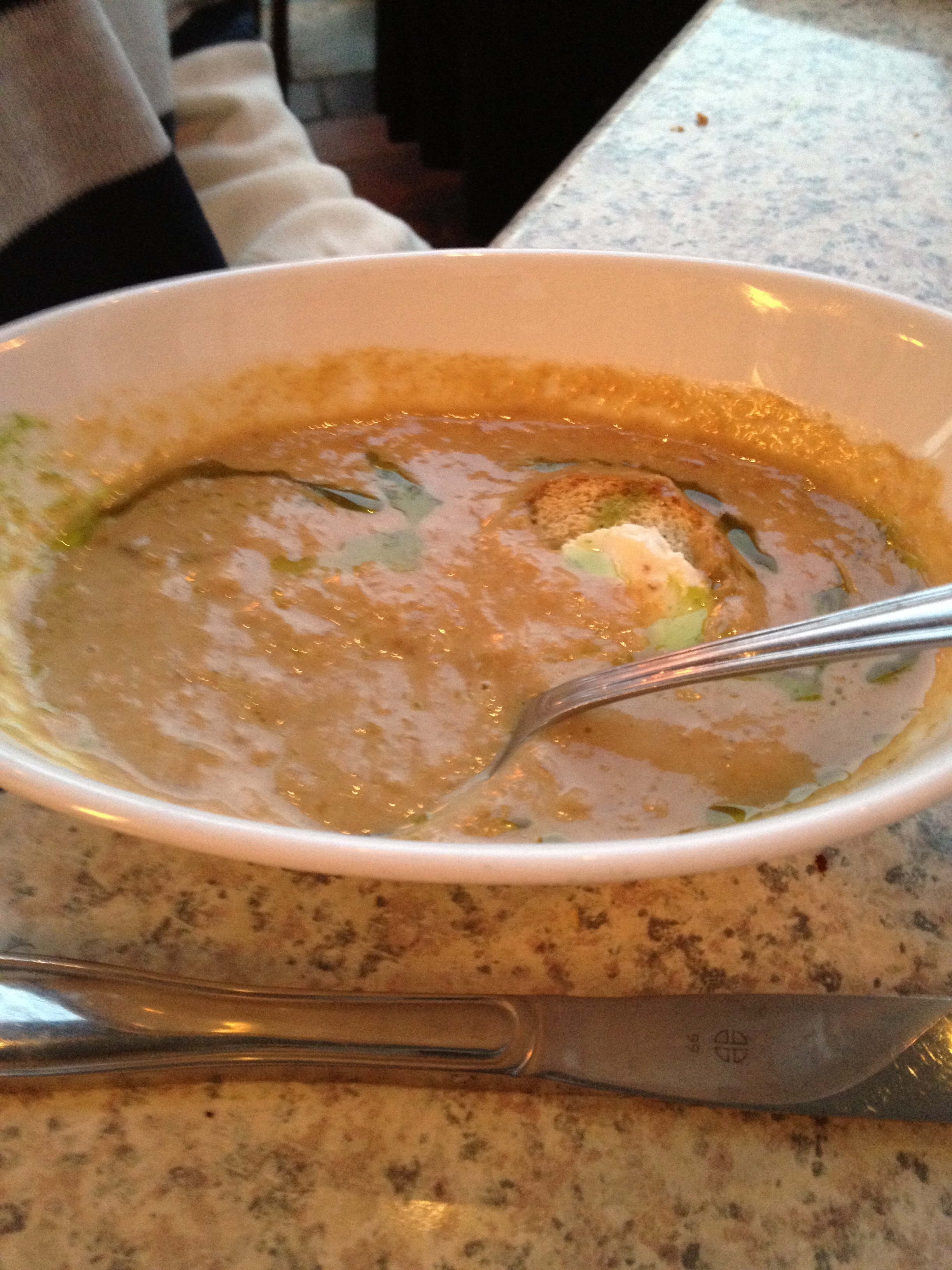 My mother went with the Prix Fixe and also went with the bisque along with the hanger steak and blondie for dessert (She didn’t have a choice when it came to choosing her dessert. Once I saw that it came with salted caramel, pretzels and peanuts, it was a no brainer.) First of all, the ordering system is cumbersome and I felt like I was in the Soup Nazi episode from Seinfeld. Each person had to order their soup, salad or app first then their entrée. If you order then change your mind, the waiter has to delete your original choices out of his handheld PDA and start from the beginning. After we ordered, I realized I wanted to add an appetizer and felt as though it was an inconvenience to change things once they were entered into this seemingly regimented system. It definitely took away from the dining experience and I’m sure it results in lower food bills since guests probably feel as though once they order, they are locked in. “No soup for you” wouldn’t be too much of an understatement with the way things are done here. After our ordering debacle, the bisque came out relatively fast and was extremely rich and hearty which hit the spot on a cool fall evening. The flavor was wonderful and not too overpowering and the extra virgin olive oil drizzled on top was really delicious. Next came the pumpkin raviolis topped with walnuts, pumpkin seeds, chevre and brown sage butter. 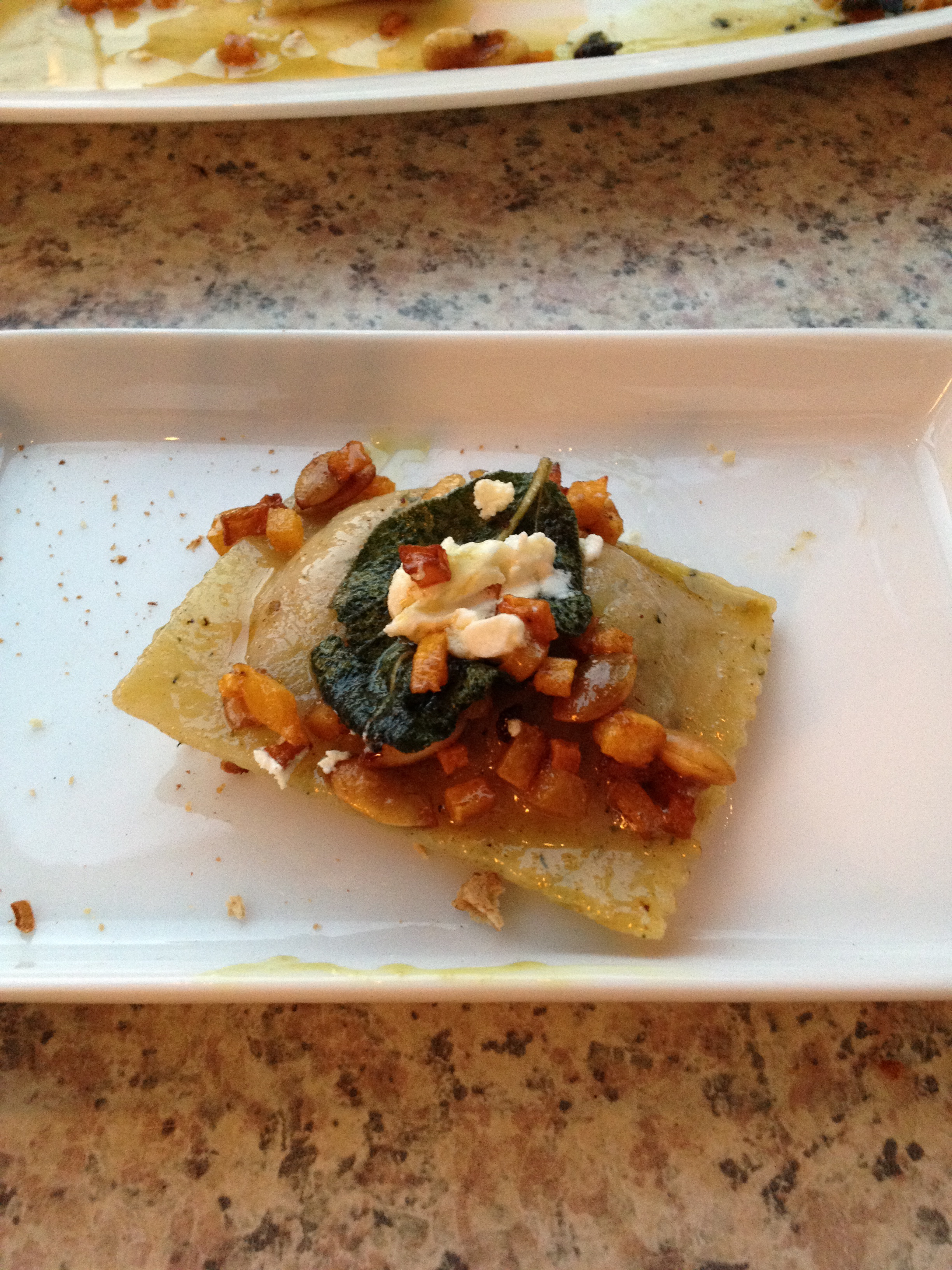 They weren’t too sweet which was enjoyable and the crunch of the nuts and seeds was a nice contrast amongst the soft pasta. They were good but nothing special in terms of a pumpkin ravioli. It was time for the main course and I was looking forward to finally having a chance at trying some of their entrées. My salmon burger came on a griddled flatbread with shredded lettuce and a bacon tomato relish. 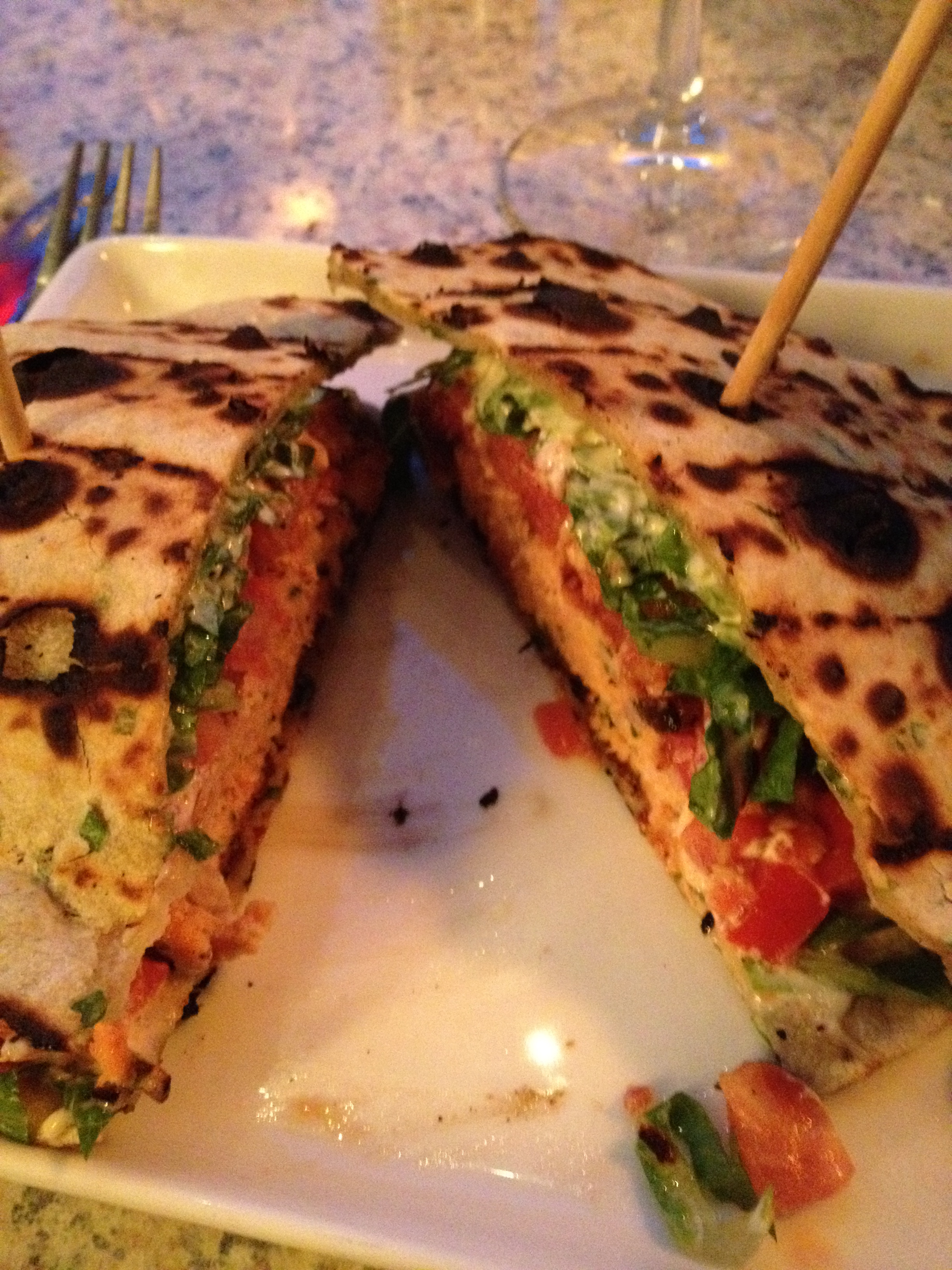 The dish was served with “tater-tot sticks” and a pickle. I was disappointed with this since the salmon was “fishy” and the burger was difficult to eat. The tater-tot sticks were awesome but it’s not something I would expect at a nicer restaurant. 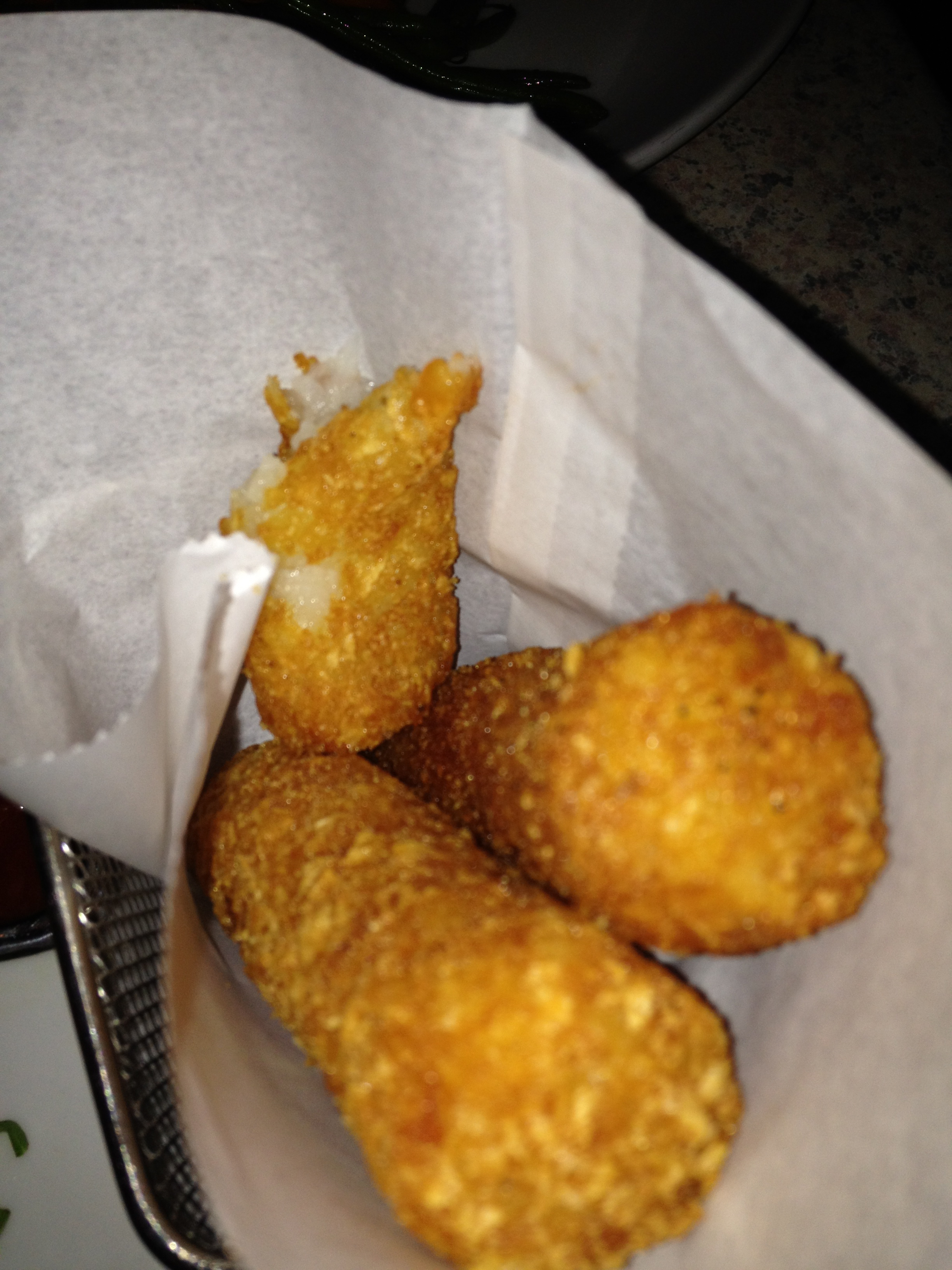 My mother’s steak was tough and not cooked to her liking. The dish came with haricot verts and mashed potatoes that were both good but again, nothing out of the ordinary. My husband’s butternut chicken risotto pretty much left us feeling the same way. I had no problem eating the blondie because it’s filed with sugar and I’m a sucker for anything with sugar in it, but I wouldn’t classify it as a gourmet dessert. I loved the crunchy peanuts and chewy consistency of the blondie but I’ve gotten just as good if not better high-end baked goods at local coffee shops. I wasn’t thrilled with the presentation either. 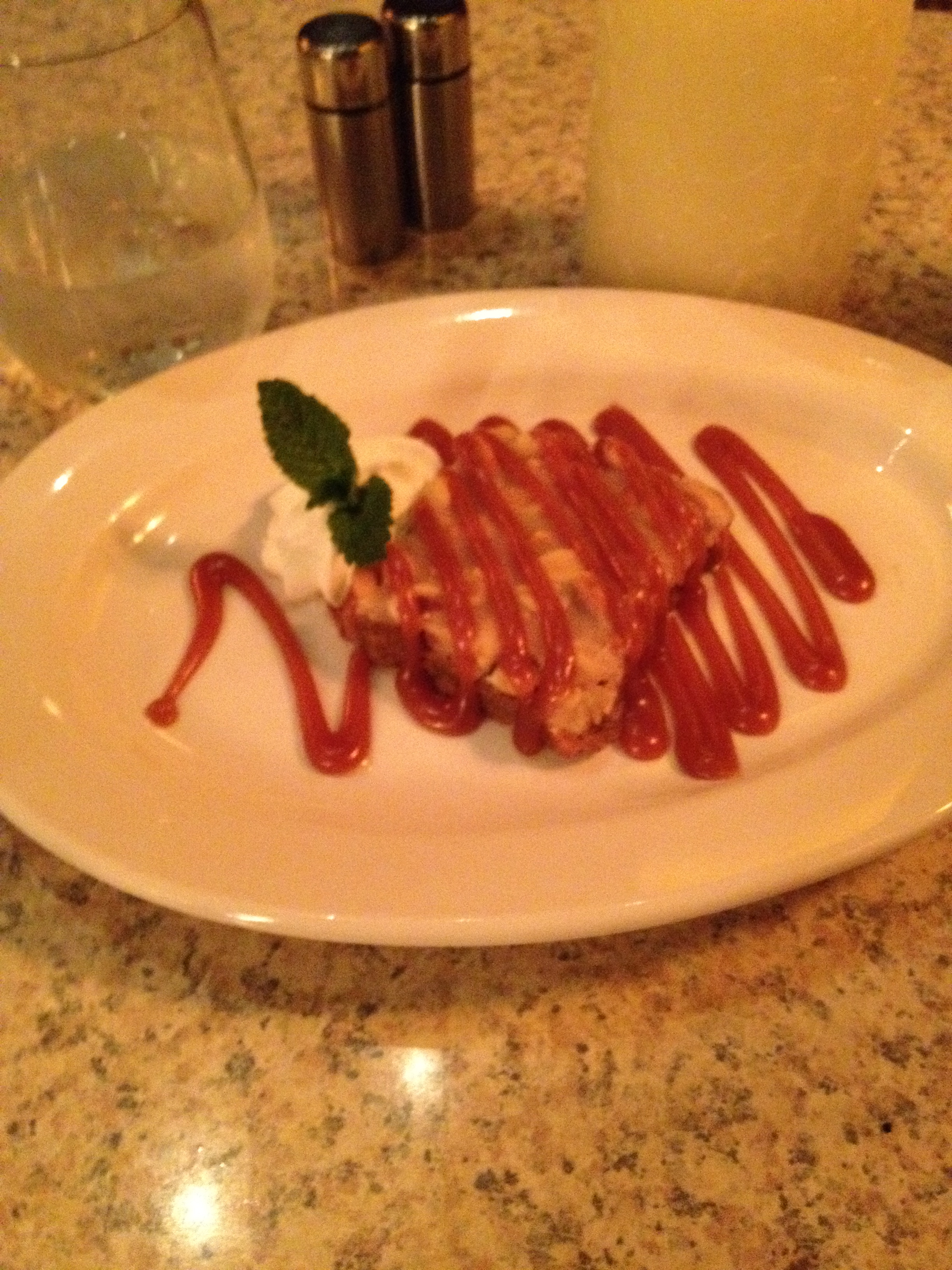 All in all I would give them a 6.5 out of 10. My impression of Maestro’s was that it’s more of a fine dining restaurant and their prices certainly reflect that. I have had much better meals at Brown’s Brewing at less then half the price. I don’t want to say that the food was bad because it wasn’t; it was just way under par for what we had anticipated. I will absolutely go back but it will be for a couple of drinks on the patio and lamb lollipops. Think I will head to Capriccio afterwards or maybe just Esperanto’s for a dough-boy. I’ll be conducting my dinners elsewhere going forward.