Home / Events / Giving Tuesday - "A Taste of Saratoga: Restaurants Then and Now"

Giving Tuesday - "A Taste of Saratoga: Restaurants Then and Now" 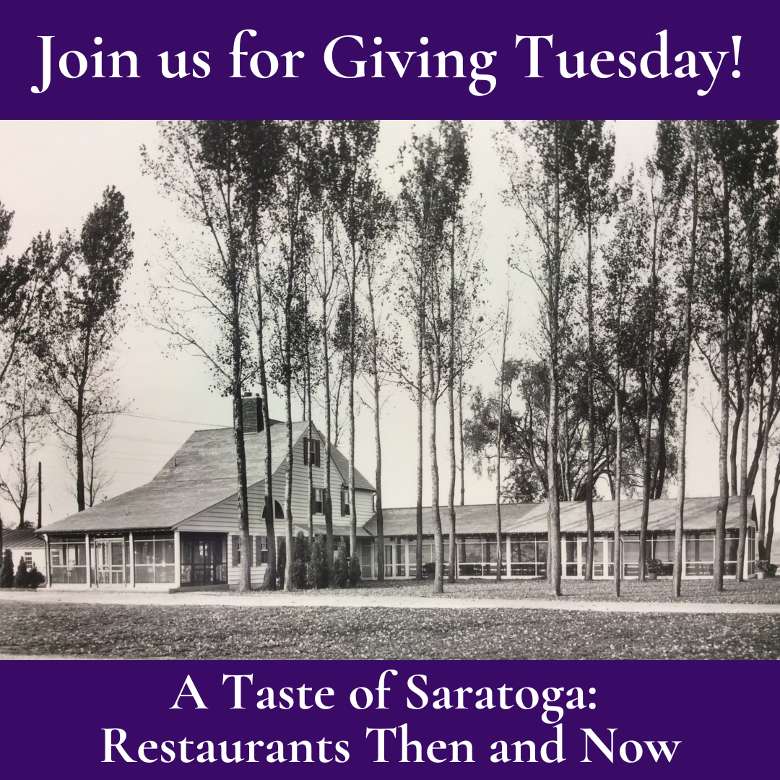 Join the Saratoga Springs Preservation Foundation for "A Taste of Saratoga: Restaurants Then and Now" at 7:00PM on Tuesday, November 29, Giving Tuesday. This virtual program will highlight restaurants, both past and present, located in Saratoga Springs, New York. Featured restaurants include Pennell’s, Lou’s Luncheonette, The Ash Grove Inn, Ma DeMartino’s, Lillian’s and more. This event is being held as part of Giving Tuesday, an internationally recognized day of philanthropy that takes place the Tuesday after Thanksgiving. “The Foundation is excited to participate in Giving Tuesday to encourage people to give back to their community and help preserve places that matter,” said Membership & Programs Director Nicole Babie.

Carol Godette, a former school teacher and author, will present and share selections from her Simply Saratoga articles on Zoom. "For years, Saratoga Springs has been home to beloved family-owned and operated restaurants that have been cherished for generations. I’m excited to share the history about Pennell’s – Saratoga’s oldest continually running restaurant that is celebrating its 100th year – as well as other restaurants that have offered residents and visitors of Saratoga Springs unique experiences, delicious recipes, and unforgettable memories,” said Carol Godette. Special guest Craig Wilson, before becoming a distinguished columnist for USA Today, was a features writer for The Saratogian. He frequently lunched at Lou’s giving him first hand insight into a profile he wrote on Lou Goldsmith. Craig will be sharing one of his columns along with other remembrances and insights of his years in Saratoga.

This virtual program is offered for a suggested donation of $10 or more. Thanks to the support of deJonghe Original Jewelry, the Foundation will host a raffle of a “Spirit of Life” 14k gold pendant and necklace in celebration of Katrina Trask. Anyone who donates $50 or more to the Foundation by November 29 will be entered for a chance to win.

In addition to the virtual program, The Brook Tavern, 139 Union Avenue, will be hosting “Dine for a Cause” event to benefit the Saratoga Springs Preservation Foundation on Thursday, December 1. The Brook Tavern will generously donate 25% of all food sales that evening, both dine-in and takeout, as part of our Giving Tuesday celebration.

Murder in the Canfield Casino: Who Killed Ms. Sara Toga?

Dine for a Cause at The Brook Tavern