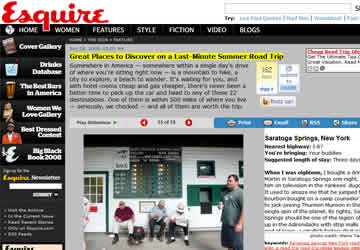 SARATOGA SPRINGS NY - Esquire writer Tom Chiarella provided the inside scoop and enticing details of why Saratoga Springs, NY, was one of 22 destinations selected by Esquire, the men's magazine, as Great Places to Discover on a Last-Minute Summer Road Trip. Citing such attractions as the Saratoga Racetrack, its numerous first-rate spas, and "a list of bars and restaurants as long as your thigh" of top quality, Esquire captured the true underappreciated "greatness" of Saratoga Springs.

Called "a full-blown city in the costume of a village" for its balance of city-like exciting attractions and events and village-like location, size, and hometown comfort feel, Saratoga Springs stood proudly among other destinations such as spots in Florida, Maine, and California. The praises were lavished on everything Saratoga has to offer, from small cafes for breakfast to the draw and thrill of the Racetrack (which Saratoga may proudly point out was called the most beautiful in the county by Esquire). Saratoga's golf received an appreciative nod, and Hattie's was asserted as sporting the "best friend chicken on the east coast".

As the article concluded, the magazine writer complimented the Victorian-era beauty of Saratoga Springs, with its mountainous surroundings and history of famous visitors.

The combination of this nod from the highly popular Esquire Magazine, and Lake George's feature on the viewer-heavy Today show, are beginning to reveal the untasted and unspoiled fruits of the Great Albany and Adirondack areas. With newcoming popularity and appreciation, locals will be proud to say that "We always knew, even before the rest of the world found out!"

See the feature in Esquire »