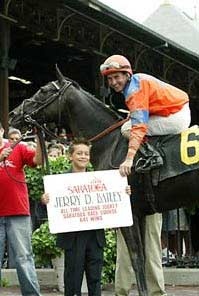 Jerry Bailey, retired Hall of Fame jockey, part-time Saratoga Springs resident, and Saratoga's all-time leading rider, graciously answers our questions in this interview with Saratoga.com. Considered one of the greatest jockeys of all time, the award-wining Bailey has an impressive 5,892 wins and his mounts have earned more than $295 million - second only to Pat Day. Racing fans often know him as the regular rider of the great Cigar in the 1990s.

1. You are considered one of the greatest jockeys in history and you've had a long and exciting career. Can you name one or two of your favorite highlights?

Probably both KY Derby's along with The first Dubai World Cup on the great Cigar.

2. What was special about racing in Saratoga Springs, NY?

Saratoga was always special because it was world class racing in a country fair like atmosphere.

3. Was there any race in particular that was your hardest win?

The KY Derby is the hardest race for a jockey to win. Mostly because even though you may have the best horse, you must also have a lot of racing luck because the field is so much larger than most races.

4. How did it feel to have an ice cream created in your honor?! (Chocko Jocko, by Stewarts)

It rated right up there with the bobblehead!!

5. In your book, Against The Odds: Riding for My Life, you mention that you had hit rock bottom. Was that during any specific racing season and did it affect your racing?

It was at the end of 1988 and yes, it did affect my riding. It was only after I quit drinking that I was able to fufill my potential as a jockey and a human being.

6. What was it that helped you turn things around in your life?

My wife was very supportive, and the program of AA.

7. Now that you're retired, do you attend any horse races in your spare time - just for fun?

The only time I attend the races is when I broadcast races for ESPN and ABC.

8. How often do you visit Saratoga Springs, NY?

Since I maintain a residence here, I spend most of the summer, and a couple of weeks around Christmas.

9. When in Saratoga, is there something in particular that you feel compelled to do or see?

I enjoy all that Saratoga has to offer. I live on Lake Saratoga, so I water Ski, I play golf at Saratoga National Golf Course and the Saratoga Golf and Polo club.