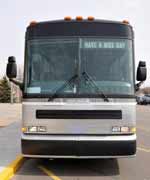 SARATOGA SPRINGS, NY -Starting in August a bus route will run between Saratoga Springs and New York City and will only cost passengers $20. The route will make two stops in NYC, 34th Street and Broadway and at 26 Canal Street. This will give passengers the opportunity for convenient travel at an affordable price.

NY City Bus has been running a bus route from Albany to NYC for the past month and will be adding a stop in Saratoga Springs to the existing route. The additional stop is scheduled to begin on August 1, 2010.

This stop will be located on Broadway across from Congress Park or across the street outside of the Visitors Center, depending on which way you are headed. The bus service has no affiliation with the city of Saratoga Springs.

NY City Bus offers air conditioning and a restroom on every bus. The bus schedule has not yet been finalized, but there will be two departures and return trips everyday of the week.