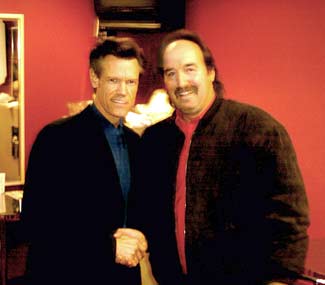 Vinnie Mark at The Saratoga Comedy Club where he brings over 20 years of experience and a lot of laughter to Saratoga Springs!

An Interview With Saratoga Business Owner and Comedian Vinnie Mark

1. How long have you been in the comedy business?

I've been in the comedy business for 27 years.

2. How did you get started in comedy?

I got started in 1981 in an improv group on Long Island. It was called The Long Island Laughter Company (LILCO) which was our power company's name on Long Island! Another member of the group was Rosie O'Donnell. I worked with them [LILCO] for 12 years.

3. What makes you unique from other comics out there?

I feel I am different because I can really roll with the flow of the show, and ad-lib around the basic structure of my show. The improv group years helped me out there, also I love the fact that when needed I can perform with kids and adults in the audience (G-rated)....I love that!

4. Do you believe in magic?

5. Do you have a favorite stereotype or group to pick on in your acts?

I don't like "to pick on" anyone, sometimes some harmless fun! No specific group really?

6. What makes a good audience?

An audience that is there to have fun and ready to laugh, after all, we all need a good laugh.

7. What makes a poor audience?

Drunk audiences are tough. Also if they didn't pay for their show tickets, they really don't put a "value" on the show.

8. What is special or different about the audience in Saratoga Springs?

Saratoga audiences are great because they are intelligent, and not sitting with their arms crossed, thinking "Make me laugh" attitude. Most of the time there to have a great time and laugh.

9. What would you tell someone who says, "Everyone's a comedian"?

Everyone's a comedian??? I would say try getting in front of 300-400 strangers for 45 mins. And entertain them. It's a lot different than being the funny guy or gal at the office.

10. What are some of the highlights of your career?

I actually have been fairly lucky with having several highlights.... I did The David Letterman show in 1987. And several other television shots, but most recently I had the pleasure of opening for Country super star Randy Travis. That was my dream gig. Country audiences are great.

11. Who is your favorite comedian and why?

I loved Rodney Dangerfield, worked with him in Vegas. Don Rickles would have to be my favorite, love his timing and rhythm and he cracks me up everytime...haven't met him yet?

12. What's it like being married to a comedian [Jodi Weiner]?

Being married to a comedian is great at times, because we can help each other out when something needs a little fixing -- .not that we listen to each other...LOL. Everyone always says "it must be a riot at home" -- yeah right.