Yet another fantastic week has passed at the Saratoga Race Course. Check out some of the highlights from week five: 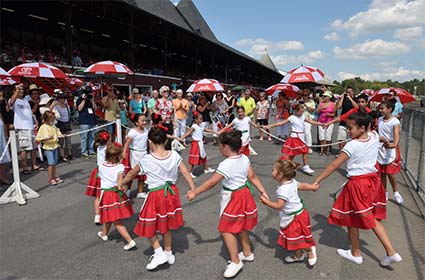 NYRA celebrated the culture and tradition of the Bel Paese during Italian American Heritage Day at the track. The day-long festivities featured Italian music, dance, entertainment, crafts and food from 11:00 AM to 5:00 PM in the Saratoga Pavilion.
The day’s eighth race was named “Buon Giorno: Italian-American Heritage Day” in honor of the celebration. Italian tenor, Angelo Mazzone, Jr., performed the classic opera song “O Sole Mio” in the winner’s circle following the race. “It’s an honor to be singing here in Saratoga, my hometown, especially to be representing the Italian-American Community of the Capital District. It’s a really great honor,” Mazzone stated in a press release.
In addition to Mazzone, there were several other performers including Neapolitan musician Umberto Palmieri, Italian opera singer Christina Pizzino-Catalano, singer Franklin Micare and Italian folk dancers from the Albany Dancesport Club and the Italian American Community Center Ballerini.
There was also an array of Italian food specials available for purchase at participating vendors throughout the track. 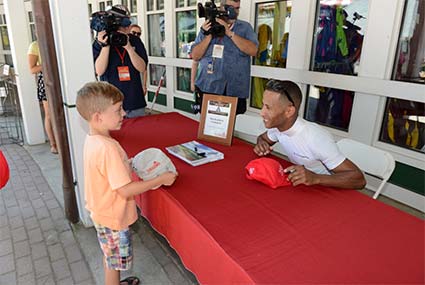 Photo Courtesy of NYRA
Meet and Greet with Jockey Kendrick Carmouche
The Community Outreach Booth hosted a special meet and greet to benefit the non-profit organization, Dyer-Phelps. Kendrick Carmouche, the first African-American rider to hang his tack at the Saratoga Race Course, signed autographs and took photos with fans at the Booth with a suggested donation to Dyer-Phelps.
This summer marks Carmouche’s first full season riding at Saratoga Race Course and he has had six wins so far this summer! “How great it was to have him here today,” said Alton Franklin, husband of Dyer-Phelps pastor Vivian Franklin, in a press release. “We are very appreciative of Saratoga Race Course for today.”
Dyer-Phelps is one of several AME Zion establishments in the Capital Region that works to move their mission forward. Over the years, their programs have been implemented to help families find low-income housing, jobs, financial planning assistance and health & daycare services.