Were you at Saratoga.com’s hit Shop, Sip & Stroll event at Gaffney’s a couple of weeks ago? Perhaps you’ve otherwise visited the popular restaurant on Caroline Street.

The current owner has recently sold Gaffney’s after running the business for over three decades – here’s why he sold and what we can expect from the restaurant going forward. 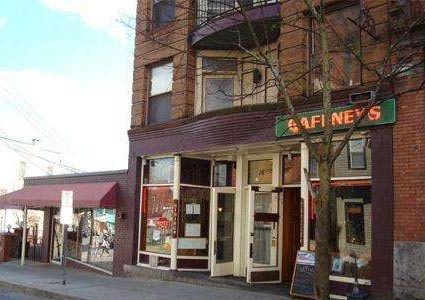 The Sale of Gaffney’s

The property was actually not on the market, but Baker had been thinking about selling for about a year when this perfect opportunity came up.

“I’m almost 60, and after 35 years, it was time to think about selling,” Baker told the Albany Business Review.

So far, it appears the new owners intend to keep the restaurant mostly the same – current employees will stay on, and Saratoga Hospitality aims to keep up the legacy Baker is leaving behind.

“We built a great thing for 35 years and they’re just going to build on it,” Baker told The Saratogian.

Baker has had a long and successful run at Gaffney’s, expanding and refining the business over the years. For instance, in 1983 he began offering seating in the garden and in 1996 he purchased a neighboring building, which now houses a second bar and is known as “The Starting Gate;” there is also “The Original Bar” and “The Winner’s Circle,” which is an outside bar.

Baker’s last days at Gaffney’s will be in the beginning of January; he’ll be working with the new owners in the meantime to ensure a seamless transition. Gaffney’s is hosting a Christmas party at 7pm on Thursday, December 15th, as a way for longtime customers to say goodbye to Baker.

Local artist Rick Bolton will perform at the event, and some of Gaffney’s former bartenders will make an appearance. A portion of the proceeds will go towards Wellspring, which provides services to victims of domestic violence and sexual assault in Saratoga County.

If you have a chance, come out on December 15th to send Baker off into his next journey in style, while supporting a great cause.

Nearly 700 people came together to enjoy discounts, prizes, and drinks in Saratoga, with each shopper utilizing coupons for 36 local businesses.

Gaffney’s hosted the sign-in and after-party; they later reported it was one of their best Wednesday nights ever! Other businesses, such as The National and Sloppy Kisses, also reported amazing sales that evening.

Saratoga.com anticipates hosting two Shop, Sip & Stroll events next year to continue supporting the Saratoga community – one in the spring and one in the fall.