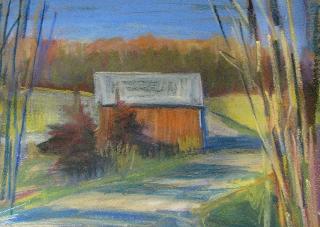 This list goes on and on at Gardenworks, a destination outing if ever there was one.

Town & Country, an exhibit of art work by Tom Kerr and Art Poulin, is a terrific excuse for exploring Gardenworks as it opens on Sunday, July 5 in the Gardenworks’ Barn Gallery.  There will be a free reception from 2:00-4:00 pm.  BONUS: Special guest Gail Fraser, author of the Lumby books, will also be signing copies of her new book, The Promise of Lumby. This is the fourth book in the series about a fictional town in the northwest.  The exhibit continues until August 30.

Tom Kerr of Salem paints old barns and other pastoral scenes of Washington County and the surrounding area.  (His painting, shown.)

Art Poulin is one of America’s most acclaimed living folk artists who paints canvases that blend his love for Americana with a deep knowledge and appreciation for color and architecture.  His originals currently hang in several of the country’s finest galleries.  His paintings were selected as book covers for the Lumby book series, written by his wife Gail Fraser.

Gail Fraser is the author of the Lumby series of books about a fictional town in the Northwest.  What Garrison Keillor did for Lake Wobegon, Gail Fraser has done for Lumby.  The acclaimed series, published by Penguin Group, centers around a charming and quirky small town and its engaging cast of characters.