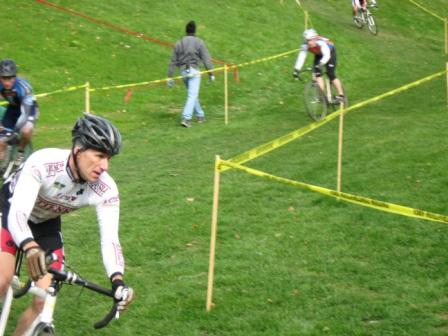 SARATOGA SPRINGS – Beginning at 9:15 a.m. on Sunday, Oct. 25, cyclocross racers from across New York State and New England will converge on the Columbia Pavilion in Spa State Park for the first-annual Saratoga Spa ‘Cross.

Cyclocross is a style of bicycle racing that evolved in northern Europe, as a way to keep bicycle racers competing through the fall and into winter, by moving them off of roads and onto muddy paths and open fields. The sport is now a popular way for many bicycle racers to end a season of road or mountain bike racing. “It’s a race that has never been held in Saratoga or the park and a very unique type of event,” said event promoter and cyclocross racer John Onderdonk “We’re hoping for a great turnout as we have designed the course thinking about the spectators as well as the racers. There are many great vantage points to watch, including hanging out in the pavilion by the fire.”

Athletes will compete throughout the day in categories broken out by age or ability. Races for children 10-14, and beginner’s categories for adults begin at 9:15 a.m., to be followed by races for master’s athletes competing in 35+, 45+, and 55+ categories at 10 a.m. Intermediate men will follow at 11 a.m. Elite women will race at 12:30 p.m., with the elite men to close out the day at 1:30 p.m. There will be a cyclocross-style race for children under 10 at noon. Cyclocross racing places demands on both a competitor’s fitness and their ability to navigate variable, and constantly changing terrain. Cyclists using specialized bicycles with road-style handlebars but wider, knobbed tires will complete multiple laps on a mile-long course that will force them to navigate obstacles, jump over barriers, and to dismount and run up hill while carrying their bike. With a course marked by yellow tape, fans will have their choice of vantage point -exciting fast stretches through the woods or on the run-up, where racers will look for a cheer (or jeer) to get them over the top of the climb.

“This race would not have been possible without the generous support of our local sponsors, who are as excited as we are to be bringing this unique event to Saratoga Springs,” said promoter Andrew Bernstein. “We were also glad to bring in food vendors and other local businesses to our race expo, to add another element to the spectator experience at Spa ‘Cross.” Sponsors include Blue Sky Bicycles, Sigma Sports, the Olde Saratoga Brewery, Eastern Mountain Sports, Embrocation Cycling Journal, and Kubricki Construction.

In addition to racing action, spectators will enjoy a race expo, with vendors from the Saratoga area, including: Blue Sky Bicycles, who will have mechanics on hand to tune bikes for racers; KD Energy, makers of organic, vegan energy bars; Happy Chain, a locally-produced chain lubricant for bicycle chains; and Sigma Sports, maker of bicycle accessories.

In addition, Saratoga Coffee Traders will be on hand to keep athletes and spectators properly caffeinated, and Joe’s Burrito, of Albany, will serve chicken, beef, and vegetable burritos.

Spa ‘Cross is the first-ever cyclocross race to be held in Saratoga Springs, and is the seventh race of the NYCross.com series, a nine-race series centered around the Capital Region.

To register online, please visit www.bikereg.com. For more information, please visit us online at www.spacx.blogspot.com. Also, you can find us on Facebook!

DIRECTIONS: I 87 to exit 13N. After exiting, head north on Route 9. Go through the first set of lights. At the second light, turn left to enter the park. Follow signs for the Columbia Pavilion.