House In Saratoga Featured On HGTV's Series
"If Walls Could Talk"

A Turn-of-the-Century Mystery Scandal in Saratoga! This unique story from the book Saratoga's Great Ladies: Broadway and Franklin Square is about the Pruyn/Pettee house on North Broadway in Saratoga Springs. Brought to you by Hollis Palmer, owner of Deep Root Publications and Derby Tours of Saratoga.

The original owner of the Pruyn/Pettee house told his secretary and his wife that he was going on a business trip to visit his facility in Virginia. He told each that he expected to be back in a couple of days. Since he had taken many similar trips, no one thought it peculiar until it was learned two days later that he had never shown up at the Virginia operation. 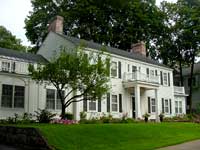 It was May of 1923 and newspapers across the country were treated to the brand of scandal on which they thrive. Headlines similar to the one in the Saratogian; Pettee Gone; $300,000 Missing; or the one the following day in the New York Times; Vanishes Leaving $300,000 Shortage ran in newspapers across the country. Whatever the headline, the fact was simple: the person who had built this house the year before was one of the most famous missing persons in the country.

In response to the news, both of the national telegraphs used by the newspapers were sending out his picture and description. Not surprisingly, there were suddenly "Pettee sightings" everywhere, especially in Saratoga.

Lore has it that the man who built this house was the mayor who embezzled the city's money and disappeared. Like much that is passed along as oral history, this is the merger of two separate accounts blended together to make a more appealing tale. The truth concerning the events is a little different. Pettee had been the mayor of Saratoga from 1917-1919. It is also true that he embezzled $300,000. The problem for the storytellers is that his term as mayor had been over for four years before the embezzlement occurred. In fact, the money that was taken was from his company, not the city. However, since so many local citizens invested in Pettee's company, his action probably felt, to many of them, that the missing money was from the city's coffers.

Harry Pettee, with his brother George, started a company bottling the carbon dioxide that was present in the springs out near the Geysers in the Saratoga State Park. His company, General Carbonic Gas, grew quickly and by 1911 he was in a position to buy the house at 55 Union Avenue. Handsome, likable, and at the least financially comfortable, Pettee was immensely popular in the city. In 1916 he decided to turn his popularity into politics running successfully for mayor. The spread in the popular vote in his victory was larger than any of the other successful candidates. Pettee's gas company was one of those that had been caught up in the State's efforts to save the mineral springs by banning the bottling of carbon dioxide. By the end of the first decade in the century it was understood that the underground carbon dioxide gas was needed as pressure to force the spring water to the surface. By an act of the State Legislature in the early teens, Pettee was forced to sell his company's holdings in the area of the geysers.

From the record, it seems that the money Pettee received for his gas rights changed his standard of living or at least his attitude on spending. Forced out of Saratoga, Pettee moved his principal operations to Newark, New Jersey and Long Island City, while making his headquarters in Manhattan. Over the next five years Pettee's gas company expanded to include seven different gas bottling plants around the country.

In 1923 Pettee's salary as president of the company was $25,000 a year (at least 20 times that of the average worker). The dividends on his stock holdings had been in the vicinity of another $40,000 each year. In total it was estimated that in the three years before his disappearance his total compensation had exceeded $200,000. If the reported $300,000 was missing, the natural question became where did the $500,000 go? To add to the dilemma, it was learned that in the days before he disappeared Pettee had his wife sign over an insurance policy she owned so that he could cash it in, providing him with another $15,000.

With no history of gambling or drinking to excess, the reporters started looking into his lifestyle. It was soon learned that he enjoyed spending several weeks each winter in Palm Beach. His trips south were so frequent that while he was mayor of Saratoga he was given the dubious nickname of "Palm Beach going Mayor." At the time of the embezzlement Pettee and his wife maintained an apartment in New York City, the island of conspicuous consumption. Even measured against those who lived well, he was considered a "spender."

The answer to the disappearing money was discovered in the three rambling notes that Pettee left behind in the company safe. He admitted that he had been "inappropriately intimate" with a female whose name he wrote in the note but was never released to the media. In the notes he mentioned suicide by jumping off an ocean-going ship, but no one except his wife thought him capable of taking his own life. (She may have been hoping.)

What is known is the woman mentioned in the notes remained in New York City, that he did not have a passport to board a foreign vessel, that his wife kept their Saratoga home for a decade, and that Harry was never seen again.

There is a second story that deserves close examination. Could it be that he was so angry with the city, that when his wife pushed for this house to be built he literally turned his back on the city? - This house is built backward - the pillars and porches are on the back and the grand open staircase greets guest if they enter the back door! ©