Home / Things To Do / Fairs / Traditions

This article is sponsored by the Saratoga County Fair 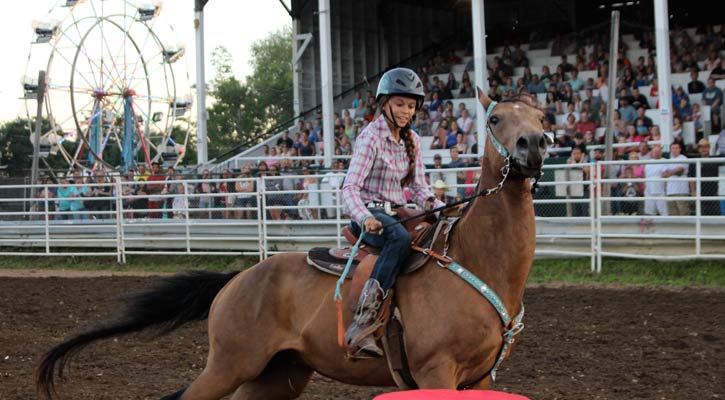 The History of the County Fair

How does the Saratoga County Fair keep things fresh and exciting, while still paying homage to the traditions that are at the core of the fair? It's a balance the organizers do quite well.

Fairs have a rich history in our state and our country as a whole, having served communities for hundreds of years. The concept of a local fair can be traced all the way back to biblical times; they became common in this country around the mid-1700s.

When county fairs first came about in this country, they focused primarily on agriculture and religion, as religion was at the center of most social activities at that time. As time went on, fairs became less religious and more secular, although they still continue to focus heavily on agriculture. Education, entertainment, and competition have emerged as huge elements of the fair.

Agriculture, Education & 4-H: At The Heart of the Fair 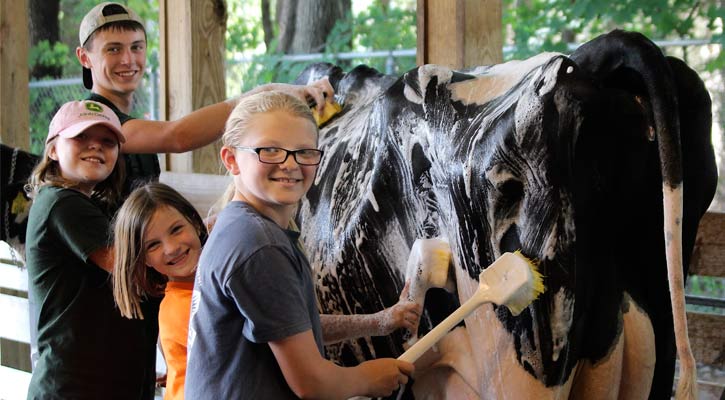 Around the 1800s many colleges and universities began offering schools of agriculture. People started thinking about growing food as a scientific process to be explored and expanded upon. Farmers began utilizing county fairs as a way to learn about new advancements in the agriculture sector.

In the late 1800s, researchers found that adults were not very able or willing to accept new agricultural developments and concepts. But young people were. Kids and youth were open to new ideas and ways of doing things that adults just weren't - this is how 4-H came about in the early 1900s.

The first 4-H club was called either "The Tomato Club" or the "Corn Growing Club" and it was started in Minnesota in 1902. By 1912, more clubs were formed and they were officially called 4-H clubs. 4-H allowed kids to show off their skills in animal care through competitions and showings at the fair, and they still do today - this is one tradition that has continued over the years, although it's also evolved to incorporate modern elements.

At the Saratoga County Fair you'll be able to see beef cattle and dairy cattle shows and many other animal showings through 4-H that are at the core of traditions at the fair. But, as they've grown and changed with the times just like the rest of the fair, you'll also be able to catch more contemporary competitions as well.

In addition to the traditional animal competitions, you can see 4-H host an Iron Chef Competition at the Saratoga County Fair, where kids will create a meal from scratch using fresh fruits and vegetables. Additionally, there will be a Pet Care demonstration, where 4-H members bring in their pets and are quizzed on basic pet care. And, there will be an interscholastic robotics demonstration!

With 4-H conducting everything from cattle shows to robotics demonstrations it's easy to see how the Saratoga County Fair perfectly marries the agricultural traditions of the fair to newer, modern elements of education and competition. 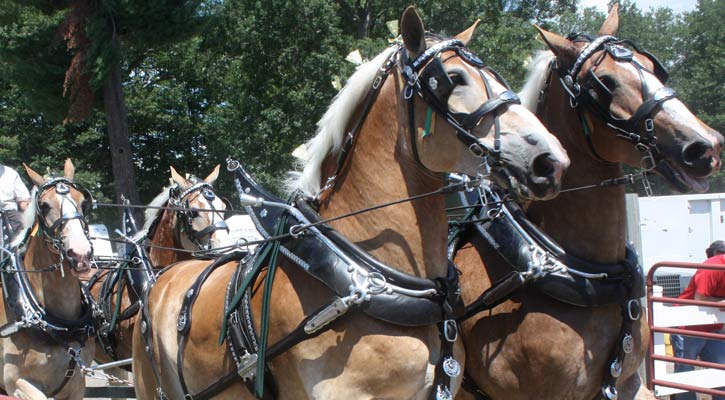 In the 1900s farmers got into the habit of boasting about how their horses could tow large farming machines better than other farmers' horses. The farmers would then challenge each other to contests to prove who had the strongest horse - this is how draft horse pulling came about.

Of course, no one does horses better than Saratoga! The Draft Horses and Eight-Horse Hitch Competition are a huge part of the Saratoga County Fair. Fair goers love to see these gigantic, gorgeous horses that weigh 2,000 pounds each. The Eight-Horse Hitch Competition was just added to the fair roster last year - no one within 100 miles hosts an event like this! The Saratoga County Fair has really brought horses and horse pulling to a new level.

What exactly is tractor pulling? It's a competitive motorsport where powerful tractors and trucks drag a weighted metal sled along a course.

Tractor pulling started out as horse pulling (mentioned previously) as there were clearly horses before there were tractors. A barn door would be removed and used as the "sled" that would be hitched to the horse. People would jump on the barn door one by one until the horse could no longer pull them. The horse that pulled the most people the greatest distance would win. Eventually, tractors began to replace horses for pulling loads.

The sport of tractor pulling came about around the 1930s but didn't really take off until the 1950s and 1960s. Tractor pulling was popular at fairs but there was no real set of rules, so in 1969 representatives from eight different states got together to create a uniform book of rules to really solidify the sport's spot in serious competitions. Tractor pulling became even more exciting during the 1970s and 1980s as tractors and their engines were improved upon.

The sled that is dragged around by the tractors has also evolved over time. Initially, sleds were simply a dead weight of fixed mass dragged by the tractors. Today, a more complex system of gears is used - as the tractor makes its way up the course weighs are pushed forward in such a way as to increase the weight until the tractor is no longer able to pull it. 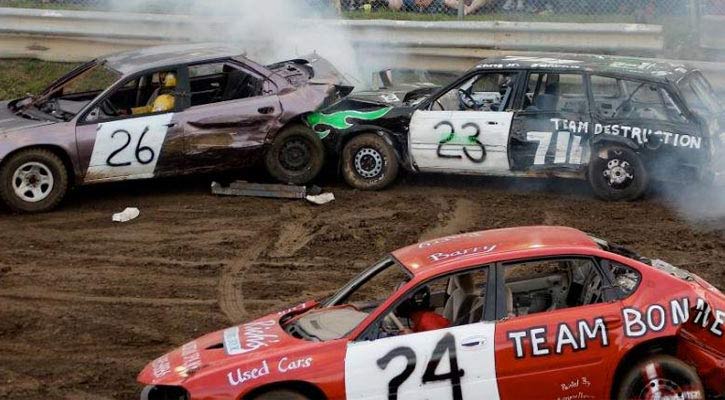 A demolition derby consists of cars driving into each other until only one is left running. Demolition derbies began to show up at county fairs around the 1950s and 1960s, although the derby had a bit of a slow start because of limited national media coverage of sports at that time. The World Series would have been covered by the media, but a demolition derby at a county fair would not.

However, through the 1960s and early 1970s love of the demolition derby grew, in part because it was popularized through the well-watched television show, Happy Days.

The Demolition Derby at the Saratoga County Fair will not disappoint - it's actually the largest in the world, provided by JM Motorsport Productions.

When fairs were first starting out they were a great chance for families living in rural communities to escape the monotony of the quiet day-to-day life on the farm. The men would compete in activities like tractor pulls, the children would showcase animals of the farm, and the women had their place too - with blue ribbon pies.

Wives and mothers would participate in county fairs by bringing in their favorite food recipes to compete against their neighbors and others in the greater community. Ribbons, plaques, and trophies would be awarded in categories of baked goods, jams and jellies, and more.

The Saratoga County Fair still does traditional food competitions, as with their King Arthur Flour Maple Oat Muffin Baking Contest. But, to draw in the youth and liven things up a bit, they also hold a pie eating contest and a donut eating contest. Once again, we can see how the Saratoga County Fair holds true to its sacred traditions while incorporating more modern contests and competitions as well.

The Axe Women of Maine

A perfect example of how the Saratoga County Fair has changed up the competitions and activities to keep things new and exhilarating would be the Axe Women of Maine - the only touring "Lumber Jill" show in the country. The Saratoga County Fair just added this element to the fair last year and we're so glad they did! It's happening throughout the week of the fair so you'll have multiple chances to catch this competition.

These fit and powerful women are world champions in logging and put on a high-energy show set to rock music. Mimicking the falling of a tree, these athletic ladies will race to chop 12 to 14 inches of a vertical log. The first woman to chop through the log wins. Bringing in the educational aspect fairs are known for, fair goers will get to learn firsthand just how incredibly involved and exhausting a sport like this actually is.

There was most certainly no Lego competition back at the county fairs of the 1800s! Kids are a huge part of any county fair and the Saratoga County Fair understands this, which is why they've included fun activities and contests for children, such as the Lego Competition. Kids can participate in various age groups or enter as a family as they build their own Lego creation. The theme? "A Day at the Fair."

Head to the Fair

Get more details on the Saratoga County Fair »