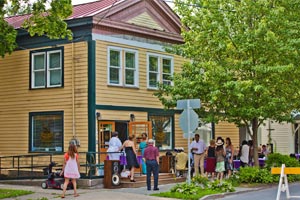 What Is The Improved Benevolent and Protective Order of Elks of the World?

The I.B.P.O.E. of W. is a fraternal organization, or social club, which was founded in response to the Benevolent and Protective Order of Elks. In 1898, the Benevolent and Protective Order of Elks was a white organization. Two black men, Arthur James Riggs and Benjamin Franklin Howard, shared the desire to create a separate Elks organization for people of color. In September of 1898, the first I.B.P.O.E. of W. was set up in Cincinnati, Ohio. Their founding principles included the promotion and enhancement of its members' welfare and happiness, the cultivation of the nobleness of the soul, and more. The I.B.P.O.E. of W. is now the largest predominately black, fraternal organization in the world.

The History Of The Frederick Allen Lodge #609 In Saratoga:

When the Frederick Allen Lodge #609 chapter was established in Saratoga in 1925, its original location was on Congress Street. At the time, Congress Street was an entertainment hub for the black community. The popular site was surrounded by other black-owned businesses, such as the Golden Grill and Hattie's Chicken Shack. However, in 1966, the building burned down, and the local chapter moved to its current location at 69 Beekman Street.

The building at 69 Beekman Street was built back in 1845 as a house in the area's residential neighborhood. Since then, the site has been used for a variety of different purposes. In 1868, a mason named Henry Freeman took up residence in the building. Soon after, in 1900, Elmer Freeman established a meat and vegetable market inside. Around this time, the area was becoming more of a commercial district. In 1930, the building went from a market to a bakery. A few years later in 1934, the building was used for Fusco's Italian Restaurant, and it stayed that way until the 1960s.

The local I.B.P.O.E. of W. chapter purchased 69 Beekman Street in the 1960s. The new headquarters served multiple purposes. The Frederick Allen Lodge #609 hosted many charitable initiatives, and the chapter built a sense of community for both members and visitors. As Congress Street became less of an entertainment hub, the Beekman Street location grew in popularity.

The Current State Of The Lodge:

Around 2005, the Beekman Street building was in dire need of help. Age had caught up with it, and lodge members even considered selling the building. Luckily, a $4,000 loan and a $500 donation from the Adirondack Trust Co. allowed them to make repairs to the roof and furnace. Thanks to these and other funds, the lodge remained open for jazz concerts, teen nights, and other year-round events.

In addition, the Saratoga Springs Preservation Foundation, with the help of a New York Main Street Grant, provided $50,000 to the lodge for their improvements around 2007.

The Giving Circle, a volunteer non-profit organization in Saratoga Springs, has led many restoration projects for the lodge. Since 2010, they have assisted in renovating the building's interior and exterior. For those intererested in helping, volunteers are always welcome to join in on new projects.

Today, the historic building hosts both The Frederick Allen Lodge #609 and the organization's auxiliary chapter, The Mary A. Carter Temple #362. The two groups continue to run events and fundraisers to support the local Saratoga community.